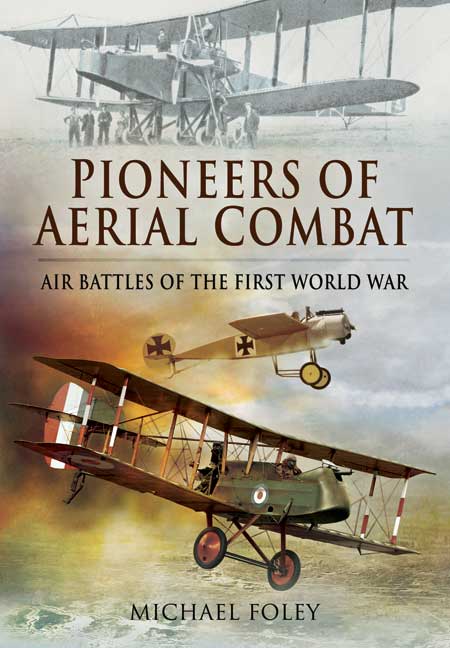 Click here for help on how to download our eBooks
Add to Basket
Add to Wishlist
You'll be £4.99 closer to your next £10.00 credit when you purchase Pioneers of Aerial Combat. What's this?
Need a currency converter? Check XE.com for live rates

When the Wright Brothers made their first flight in the early years of the twentieth century it sparked the imagination of those who wanted to fly, both in their country and around the world. In Britain, however, the spark wasn't strong enough to light a fire and it was in other parts of Europe, notably France, where flight began to develop seriously.

Early pioneers of flight faced a high level of danger and many died in pursuit of fulfilling their dream. Although aircraft design had made incredible progress by the time of the outbreak of war, accidents still occurred on a regular basis. For some time, as many pilots died in accidents as they did in combat.

This publication consolidates a range of stories, insights, and facts that, when combined, offer a vivid impression of events as they unfolded. The chaos stirred up during the First World War and the scramble to develop aircraft in response to the threat to homeland security is eloquently relayed, as are the battles that characterized this conflicted era. The reality of conflict gave aviation engineers and designers the opportunity to test their craft in the harshest of environments, pushing the benchmark ever higher in terms of what could be achieved. Sure to appeal to aviation enthusiasts and historians alike, this work offers the reader a full account of the developmental early days of flight.

This handsomely bound overview with its eye-catching dust jacket, is recommended to people interested in early British aviation history.

This short book manages to pack a lot of history of early flight into a small package. Foley takes us on a journey from the earliest origins of powered manned flight, through early military uses, to the early post First World War developments.

Michael Foley has a background in writing both local and military history. It is reflected in the quality of writing and research. in the appendices as they detail the First World War airfields, early aircraft manufacturers, and aviation museums and collections in the UK. The bibliography also gives evidence of wide and appropriate research.

Overall, a good read, and a book that any aviation enthusiast should be glad to receive.

For some time the ratio of pilots killed in action to accidents was on parity. This volume outlines the lives of these heroic fighters / aviators and it consolidates a range of stories about them and their activities. The author has drawn on many recorded stories, insights and facts, that when combined reveal a vivid impression of the aerial battlefield.

Overall this is a nice easy to read and enjoyable tome. It concentrates on the early years of flight and how these early craft were turned into combat vehicles. It deserves to be read by anyone who has an interest in these early years of aerial combat and the author deserves congratulations on a job well done.

The author delivers a detailed, engaging and comprehensive description of aerial combat through World War One. The combination of a fine text, well chosen photographs, useful appendices and comprehensive index, make this book of considerable value to military historians and enthusiasts.