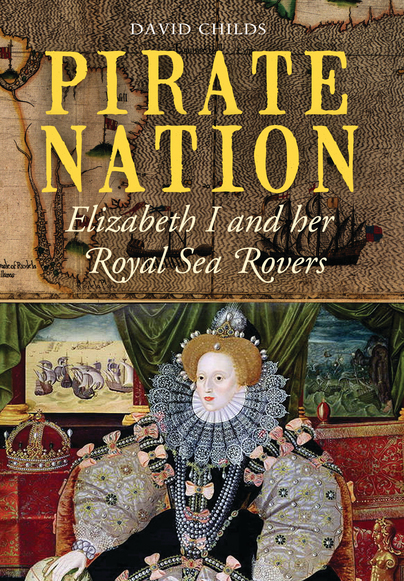 Elizabeth I and her Royal Sea Rovers

Click here for help on how to download our eBooks
Add to Basket
Add to Wishlist
You'll be £10.00 closer to your next £10.00 credit when you purchase Pirate Nation. What's this?
Need a currency converter? Check XE.com for live rates

For all the romantic mythology surrounding the court of Queen Elizabeth I, the financial underpinning of the reign of 'Gloriana' was decidedly sordid. Elizabeth's policy of seizing foreign assets made her popular at home but drew her into a public/private partnership with pirates who preyed on the state's foes and friends alike, being rewarded or punished depending on how much of a cut the Queen received, rather than the legitimacy of their action. For this reason the rule of law at sea was arbitrary, and almost non-existent. Even those, such as the Lord Admiral and the Court of Admiralty, who were tasked with policing the seas and eliminating piracy, managed their own pirate fleets. While honest merchants could rail and fail, the value to the exchequer of this dubious income was enormous, often equalling, on an annual basis, the input from all other sources such as taxation or customs dues.
However, the practice of piracy taught English seamen how to fight and, when the nation was at its greatest peril, in 1588, it was pirates who kept the Armada away from the coast. Effingham, Grenville, Ralegh and Drake, became 'admirals all for England's sake', but this highly original book argues that their deeply ingrained piratical approach to naval warfare almost allowed the Armada to succeed. This is only one of a number of startling insights into the reality of Elizabethan naval policy offered by this honest and eminently readable reappraisal.

Pirate Nation will be useful to the interested public and students of maritime history who will find a wealth of well presented and entertaining information which will stimulate further interest.

David Child's mew study, Pirate Nation: Elizabeth I and her Royal Sea Rovers is a self-avowed attempt to strip away the romance and mythology of the Elizabethan period through a detailed examination of maritime and naval enterprise.

This book is dedicated to 'George and Samuel hoping pirates give you provide you with pleasure.' It certainly does just that, with Naval sea battles to maritime exploration during the reign of Elizabeth the 1st.
A fascinating study o9f a rapacious Queen and her lawless subjects.

Childs strips away the romance from the notion of piracy and clearly shows how the Queen herself was involved in a very dirty business. The seizure of foreign ships made her popular at home but also drew Bess into partnership with pirates who preyed on friend and foe alike...

... Childs produces other surprising insights to the reality of the Tudor navy, reminding the reader that these were revolutionary times when politics were rumbustious and fortunes made on seemingly mere whims. David Childs has written his best book yet. It is highly accessible, comprehensive and insightful.

This is a thoughtful and provoking account of English seamen who started the process of developing a global Empire, linked by sea routes. As with any provoking history, there will readers who fully accept the author's interpretation and those who reject it, but both groups will find much that is of great interest to them, making this a highly desirable book.

As featured in the Salisbury Journal.

Pirate Nation is a new and thought-provoking account of how Elizabethan England, from the sovereign herself to administrators and seamen, pursued a shameless policy of piracy both at home and abroad, for the furtherance of personal wealth as much as of the State's coffers. A fascinating and eminently readable study of a rapacious queen and her lawless subjects.