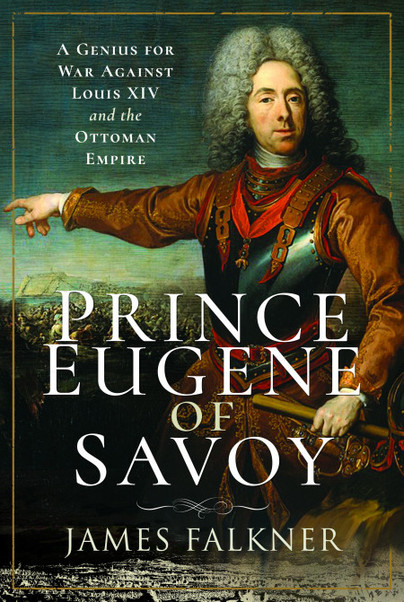 A Genius for War Against Louis XIV and the Ottoman Empire

Add to Basket
Add to Wishlist
You'll be £25.00 closer to your next £10.00 credit when you purchase Prince Eugene of Savoy. What's this?
+£4.50 UK Delivery or free UK delivery if order is over £40
(click here for international delivery rates)

Prince Eugene of Savoy-Carignan (1663-1736), French born of an Italian mother, was destined for the church, but fled France as a young man and chose the life of a soldier. He entered the service of the Habsburg Emperor Leopold I in 1683 and rose rapidly to become one of the greatest military commanders of the age, playing a leading role in the wars against both the Ottoman Turks and the French. James Falkner, in this the first full biography of Eugene to be published in English for forty years, reconstructs his military campaigns in compelling detail and describes his career as a politician and statesman.

Eugene first showed his military genius during the siege of Vienna in 1683 where the Ottoman Turkish threat to western Europe was thrown back, and he commanded the Imperial army at the resounding victory over the Ottomans at Zenta in 1697. Most famously for English readers, he joined John Churchill, 1st Duke of Marlborough in the victory over the French at Blenheim in 1704 and served alongside Marlborough at the subsequent victories at Oudenarde and Malplaquet. His later triumph, again over the Ottomans, at the capture of Belgrade in 1717, sealed his reputation as a great captain.

A lifelong bachelor although fond of women, Eugene was both a typical hard-bitten soldier and an accomplished diplomat, as well as a great patron of the arts. His summer palace, The Belvedere in Vienna, stands today as a fine monument to this extraordinary man.

Exceptionally well written and informative, as well as featuring maps, illustrations, a Chronology of the Lifer of Eugene, a Note on Terminology, Nomenclasture and Dating, and Appendix (The Holy Roman Empire, the Austrian Empire and the Habsburg Monarchy), eleven pages of Notes, a three page Bibliography, and a nine page Index, "Prince Eugene of Savoy: A Genius for War Against Louis XIV and the Ottoman Empire" is a masterpiece of historical biography and will prove to be a highly prized addition to community, college, and university library European History & Military Biography collections.

This is a compelling story of an outstanding military leader. The Frenchman who became an unlikely Austrian hero.