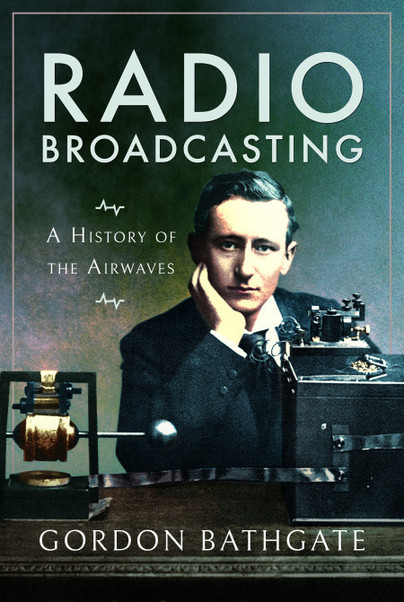 A History of the Airwaves

Click here for help on how to download our eBooks
Add to Basket
Add to Wishlist
You'll be £6.98 closer to your next £10.00 credit when you purchase Radio Broadcasting. What's this?
Need a currency converter? Check XE.com for live rates

2020 marks the centenary of Marconi’s experimental transmissions and this book seeks to commemorate this anniversary. The book examines the history of radio and traces its development from theories advanced by James Clerk Maxwell and Heinrich Hertz to the first practical demonstrations by Guglielmo Marconi. It looks back to the pioneering broadcasts of the BBC, examines the development of broadcast networks in North America and around the world. It spotlights radio's role in the Second World War.

The book also features the radio programmes and radio personalities that made a considerable impact on the listeners during the ‘Golden Era’. It also examines how radio, faced by competition from its electronic progenitor – television, adapted and survived. Indeed radio has continued to thrive despite increased competition from mobile phones, computers, mp3 players and smart speakers. The book looks to the future and speculates how radio will fare in a multi-platform future.

A formal yet comprehensive “history of the airwaves”, with thoughts on its role in the 21st century.

This book looks very much at the origins and early years of radio broadcasting all over the world but mainly Britain, Europe, New Zealand and America, but mainly Britain and Europe. The book is split into chapters that look at the various stages of radio throughout the century from the beginning Marconi, the BBC, radio in America and Europe, radio during the Wars and radio in the southern hemisphere. The book also goes onto look at how radio has fought its corner against new technology such as television and computers but also shows how radio is succeeding and has great potential to succeed well into the future.

Well this book took me back to the days of studying at college, where I did media and communications and big part of that was learning all about broadcasting history through radio. What a fascinating book to read and the writer has done a good job in covering radio virtually all over the world, although it sticks mainly to radio, it doesn’t go deep in radio stations or specific radio shows too much. That could be for a future book and would be really good especially being a big fan of the old comedies on BBC radio, where I would say it is starting to lose out to podcasting. A similar but fast upcoming medium. (Keep an eye on UKHistorianBenDavidson.co.uk soon) This is a thoroughly good read that would appeal to all but especially those that like radio or want to get into the radio communications industry. A 4 stars from me.

Radio Broadcasting by Gordon Bathgate is a new publication from the excellent Pen & Sword History. It comprehensively covers the history of radio broadcasting from Marconi and his predecessors up to 2019. Although it majors on Britain, the USA and Australia & New Zealand, Europe is covered fairly well too.

Typically for Pen & Sword, there is a lot of information in this book. However, anyone who is interested in radio will wallow in that detail! The Marconi Company began the first officially approved broadcast service to Britain in 1922 from station 2MT although radio hams had been transmitting speech and music to the London area since 1920. 2MT gave rise to a sister station in London: 2LO, with a transmitter power of 100 watts. That’s right, the same as a household light bulb before Nanny stopped us buying them.

In 1920, Station 2ADD in New York produced what is likely to have been the first public entertainment broadcast in the US. The US government at that time wasn’t keen on foreign control of its international communications and pressured Marconi to sell its operations to an American firm. OTL in Belgium, however, was broadcasting musical entertainment in early 1914.

There is humour in the book. Bathgate mentions Mexican stations broadcasting into the US that didn’t have to abide by US laws: “Another radio evangelist reportedly was trying to sell listeners autographed photos of Jesus Christ.” And the image of sound engineers producing the sound of splattering blood and guts using a bathroom plunger and warm spaghetti will stay with me for a while.

The BBC Board of Governors weren’t impressed with the American artistes heard on the Force Programme during the war, even though the public loved the programme. The Board’s minutes stated “Popularity noted, but deplored.”

Although Bathgate mentions Radio Caroline North, which was stationed off the Isle of Man, he doesn’t mention that the pejorative term “anoraks” arose from the DJs seeing the fans in wet weather gear who wanted to go out on a boat the see the station.

This is a very well written and edited book. I didn’t spot any spelling punctuation or grammatical errors - hurrah!

An interesting history of one of Britain's great, and undervalued, national institutions. Filled me with hope.

A fascinating book which is a mixture of technical detail, history, biography and the story of the development of radio broadcasting from early experimentation via two world wars to the current digital age.

Gordon Bathgate is a writer and broadcaster from Aberdeen. He has worked in radio for over 35 years and currently presents programmes for Waves Radio in Peterhead and Radio Seagull in the Netherlands. He has had articles published in the Scots Magazine, The Leopard Magazine and various other publications. He has published five books and various e-books.