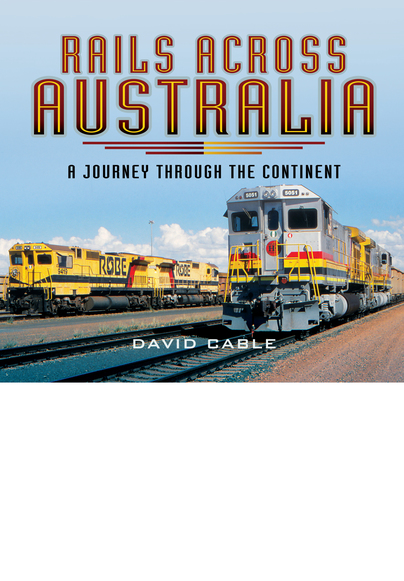 A Journey Through the Continent

Click here for help on how to download our eBooks
Add to Basket
Add to Wishlist
You'll be £10.00 closer to your next £10.00 credit when you purchase Rails Across Australia. What's this?
Need a currency converter? Check XE.com for live rates

Rails Across Australia is an album of photographs taken by David Cable, a well-regarded British author of several albums of train pictures throughout the world.

The photos were taken initially during the period between 1967 and 1973 when David lived in Adelaide, and then during several visits around the Commonwealth during the twenty-first century.

The photos cover a wide variety of trains in the mainland states, from Queensland to the Pilbara region of Western Australia, and include pictures showing trains in the landscapes, as well as close-up photos of locomotives for the modelling enthusiasts.

The well-known problems of different gauges originally established in the various states are illustrated by the individual classes designed for them, in addition to the newest designs for the standard gauge tracks now linking them.

This book is lavishly illustrated depicting some steam trains though mainly the present day diesel electric motive power. The photographs are of good quality with short but pertinent captions.

Certainly any traveller in this part of the world would find this book a useful companion.

NOTE: reviewed alongside Rails Across Europe

These two beautiful photo albums will delight everyone interested in modern and vintage rail transport. Down under, Australia is bigger than the whole of Europe put together and its rail links are particularly important for freight...

It certainly shows something of the great variety of Australian railways, particularly in terms of operators in recent years, which most of us will not be fortunate enough to see for ourselves.

On first sight a work aimed purely at Antipodean train enthusiasts but on closer inspection of much broader interest. Its prospective audience includes, as a minimum, rail engineers and transport planners, particularly those practising in countries where rail is a new or partially developed mode, who will benefit from seeing key elements of the rail system put to work in challenging and varied environments. In offering visual evidence of the shifting influences of British, North American, and indeed aboriginal cultures upon Australia’s distinct national image much of the material presented could also prove useful to social historians and human geographers. And it will appeal to the nostalgist in many of us.

The format is that of an annotated collection of colour photographs, which have been taken by the author over a period spanning six decades. The five-page Introduction provides a useful potted history of the Australian railway system. This is followed by the album itself, which is structured chronologically and subdivided as follows.

A further 10 sections forming a more comprehensive record of higher quality images captured during successive visits to the mainland and covering all the principal rail lines.

This book provides a pleasing visual archive which documents the recent evolution of the Australian railway. It is illustrated with a broad cross-section of images, capturing a mix of vehicles in both urban and rural settings, from sleek commuter trains to robust freight rigs. Each colour plate is accompanied by key relevant facts. All units are presented in both imperial and metric. More than just another coffee table book, this is a valuable record of a unique, dynamic, yet often neglected transport system underpinning one of the world’s more intriguing nations.

The author travelled widely while residing in Australia, taking numerous photographs when doing so. He is a very competent photographer and some of the images can only be described as ‘stunning’. My personal favourite within the book is the ‘outback picture of ‘BHP CW60AC 6071 Chichester …pass Goldsworthy Junction …etc.’ (it’s a long caption) on page 142. This image is quintessentially ‘Australian’; blue sky, red dirt and a very, very long train. As an example of Mr. Cable’s photographic abilities, it is excellent.

...the images within this work are beautiful, the photography superb, and if that is what the purchaser is seeking, they will be well-satisfied.