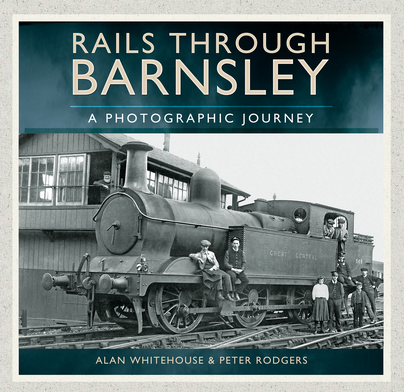 Click here for help on how to download our eBooks
Add to Basket
Add to Wishlist
You'll be £6.80 closer to your next £10.00 credit when you purchase Rails Through Barnsley. What's this?
Need a currency converter? Check XE.com for live rates

Few people realise it, but Barnsley was once the centre of a railway universe. In Victorian times, dozens of competing companies put forward schemes to build railways across, through and around the town. Between them they constructed what some still regard as the most dense railway network in the country more complicated even than Londons commuter system or even the railway networks of our major cities. The reason almost no one knows about it is because many of the lines built never saw a passenger service. They were built for one reason: coal. A maze of semi-unknown branches served every colliery in the district and the network became so overloaded with coal trains that they even had to build a railway bypass around the town to prevent everything grinding to a standstill!

Down the years Barnsleys railway network became something of a backwater, ignored by many enthusiasts and photographers. So the full story of how the railways aided the towns prosperity has rarely been told. This book is an attempt to put that right by giving a relatively short but fact-packed history, looking at each of the railway companies that opened up the town and connecting it with what was going on in the outside world. It includes a collection of high quality images, many of which have not been seen before.

As the coal industry rose and fell, so did the railway system which served it, and this book will show exactly how it all happened and why.

Barnsley's railway history is complex if largely a thing of the past as that history was largely based on coal.

An excellent book from a publisher which is relatively new to railway books.

An excellent account of railways in the Barnsley area.
Heartily recommended.

I never knew just how important the comparatively little town of Barnsley was in terms of the railways! This superb collection of photos from the authors' own collections is utterly compelling. Mainly for enthusiasts, of course, but some of the photos will be of intense interest to social historians and the like.

The visual documentation that accompanies the work is luxury, nothing more and nothing less than 172 black and white and 22 colour photographs, all of the highest quality.

A very interesting cultural work, and a jewel visually speaking.

Essential reading for any lover of Yorkshire's railways.

A good coffee table book full of exquisite photos; a great historic overview of the development of railways and South Yorkshire and Barnsley is a great focus for this expansion as coal played such a key role both in term of its mushrooming and final constriction.
At first you wonder about this bigging up of Barnsley. Then you realise it is no c0-incidence that the publisher pen & sword co uk are cemented themselves as a Barnsley success story based in the town.
I took the spill of: "Few people realise it, but Barnsley was once the centre of the railway". as hyperbole but having finished this photographic journey I am suitably corrected.
A book for everyone interested in railways. Fine text detailing the historical expansion of railways as different railway companies vied for lines and access to each new colliery that opened. We are not talking passenger services and this propulsion for profit really put railway development in context. It explains why so many duplicated lines came into existence and how a passenger journey from A to B could be made via C, D or E.
But here is a historical panorama centred on Barnsley and where its lines went and reached. It touches on the cost in financial terms of such investment but also the lives lost in its building and early passenger casualties and deaths. You will read why no-one wanted to journey by rail via Penistone.
"In a rational world, a town the size of Barnsley would never have had two railway stations." Such was the reality of railway mania and the competitive nature of railway builders. This book clearly shows the coal was railway gold.
I loved the photographs and as a young boy I remember the last few years of steam and became a train spotter in the generation of diesel and electric motive power. So, the pictures of class 20's 37's 45's and 31's was pleasing plus the whole development of electrification and the Woodhead project.
The history also brings the story up to date; the ideas of nationalism, privatisation and the loss of freight and passengers as road networks improved and the nation became car owners. The loss of seaside specials also struck a chord and I recommend this book with a specific focus as a brilliant historical overview of the history of railways that I have loved all my life. It is sad to read of its decline but this book crammed with excellent photographs which all are chosen to illustrate points within the narrative is a wonderful celebration of railways and a faithful companion on your bookshelf.

Alan Whitehouse has been a lifelong railway enthusiast. Born and brought up around Barnsley, he took an early interest in the local railway network and quickly became fascinated by it.
His career spanned 40 years in journalism, working in both print and broadcasting, beginning at the Barnsley Chronicle and ending at the BBC, where he was for many years BBC North’s Transport Correspondent. Over the years he was presented with seven journalism awards.
He has produced many other books, including works on both the famous Settle to Carlisle and Woodhead lines, as well as writing the text for a children’s pop-up book on steam locomotives.
Now retired and living in North Yorkshire, he spends his time working as volunteer footplate crew on the North Yorkshire Moors Railway.