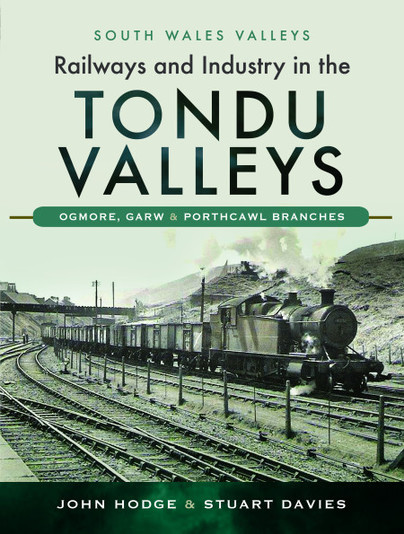 Railways and Industry in the Tondu Valleys (Kindle)

This is a companion to the Bridgend to Treherbert volume by the same authors and covers the remaining lines radiating from Tondu, ie to the east to Nantymoel, Blaengarw, Gilfach Goch and Llanharan and to the west to Porthcawl and the beginning of the line to Margam. Each line is described and illustrated with its historical background and, considering the early date of withdrawal of passenger services (1930 at Gilfach Goch) there are a number of early pictures of especial interest, as well as those from the 1950s as photographers sought to capture the rapidly disappearing infrastructure. The authors have done well to find several pictures on the Bryncethin Junction to Llanharan line that never had a passenger service where photographers had to be lucky or have inside knowledge! The re-opening of some of the lines for tip recovery in the 1990s was photographed in colour and is also included. In addition the enthusiast specials over the lines covered by both volumes are listed (with acknowledgement to sixbellsjunction web-site) and there are two illustrated chronologies of services on 7th July 1960 at Porthcawl and on 3rd May 1958, the last day of passenger services to Nantymoel.
As with the first volume, the quantity of illustrations and the very high standard of the captions again speak of the personal knowledge of the authors. The printers have done an excellent job of maintaining accurate colour values and adequate contrast on monochrome images on the same page. There are sufficient maps to help the reader orient themselves although the complete stranger will probably have to refer to the Ian Allan or Cooke Atlas from time to time! There is an index and most pictures are two per A4 page enabling detail to be appreciated. There are three or four pictures which have been over enlarged or digitally enhanced but the standard is generally good. There are a few pictures of the industrial locomotives in the collieries but there is no comprehensive coverage. This book is also recommended as a valuable addition to the documentation of South Wales railways.

There is no shortage of pictures in the book to help back up the text, and these provide a great historical insight into the history of the railways in the area, sadly many of which do not survive today.

This book is commended as valuable addition to the documentation of South Wales railways.

This is the second part of the authors’ comprehensive study of the railways radiating from Tondu. Once again, a magnificent range of images has been collected, featuring regular passenger and freight workings, as well as enthusiast specials and main line diversions, some in colour. Pictures of Caedu, Heol-y-Sheet and Blackmill Junction Signal Boxes must surely be uncommon and this reviewer was much taken with the images of ‘sandwich’ auto-workings in the Ogmore valley and the viaduct at Blackmill. Another exceptionally good work.