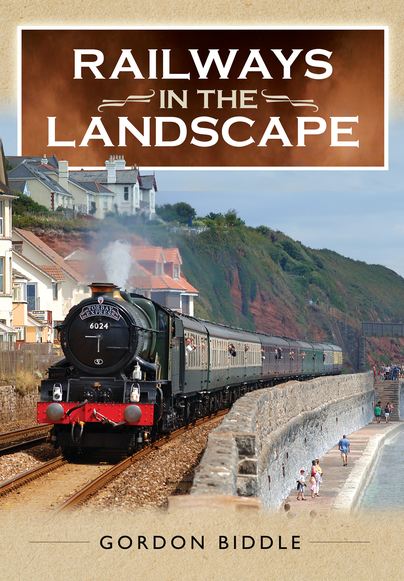 Railways in the Landscape (Kindle)

You'll be £10.00 closer to your next £10.00 credit when you purchase Railways in the Landscape. What's this?
Need a currency converter? Check XE.com for live rates

The growth of railways was a major influence in transforming Britain's landscape. This book examines how they brought about physical changes to towns, the country and coast, and had a profound affect that is still visible today, especially on the shape and size of our towns and cities.

In his book, Gordon Biddle begins by examining how railway routes transformed the rural scene and their effect on the economy, followed by an appraisal of their accompanying buildings such as stations, houses, signal boxes and yards following the changes in nineteenth-century architectural taste. He goes on to look at the impact of railways built along or near the coast, and their strong influence on the growth of seaside resorts and ports. He then turns to townscape, describing in turn the physical effect on London, other large cities, smaller towns and suburban growth.

Also included are chapters on places the railways themselves created, from new towns to villages around a station or junction; the still-visible remains of abandoned railway, not only those that followed mass closures of the 1960s, but many long-standing that date back to the nineteenth century; twentieth- and twenty-first century developments that have continued to impact on the rural and urban scene; and a comparison of contemporary illustrations of an early main line in 1838 with its appearance today.

No one is better suited than Gordon Biddle to produce this compact readable survey of the visual impact that railways have had on the British landscape.

This brilliant book could well be a companion volume to the Full Steam Ahead TV series. Superb.

The 19th Century saw an explosion of rail building in the British Isles. By the end of the Century, it was possible to travel by train to almost every part of the mainland. This enabled people who had previously travelled rarely and for short distances to speed up and down the British Isles and to enjoy some of the most fantastic scenery. This delightful book is lavishly illustrated throughout with monochrome and full colour images, a visual treat.