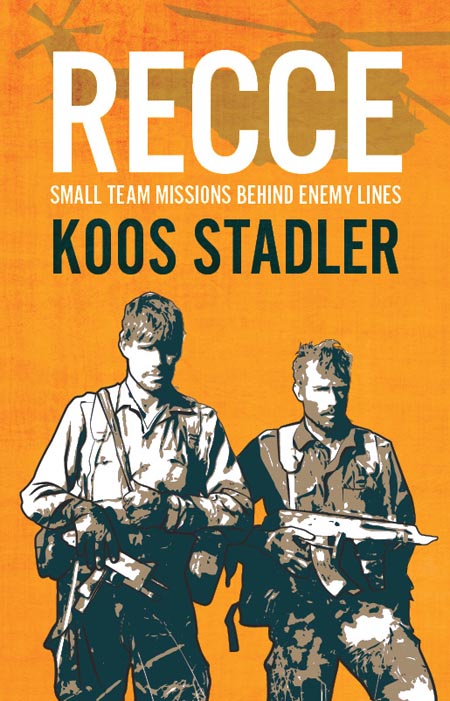 Add to Basket
You'll be £19.99 closer to your next £10.00 credit when you purchase Recce. What's this?
+£4 UK Delivery or free UK delivery if order is over £30
(click here for international delivery rates)

South African Special Forces, known as the ‘Recces’, are an elite group of soldiers that few can aspire to join. Shrouded in secrecy due to the covert nature of their work, the legendary Recces have long fascinated, but little is known about how they operate. Now one of this select band has written a tell-all book about the extraordinary missions he embarked on and the nail-biting action he experienced in the Border War.

Shortly after passing the infamously gruelling Special Forces selection course in the early 1980s, Koos Stadler joined the so-called Small Teams group at 5 Reconnaissance Regiment. This sub-unit was made up of two-man teams and was responsible for numerous secret and highly dangerous missions deep behind enemy lines.

With only one other team member, Stadler was sent to blow up railway lines and enemy fighter jets in the south of Angola. As he crawled in and out of enemy-infested territory, he stared death in the face many times.

A gripping, first–hand account that reveals the near superhuman physical and psychological powers these Special Forces operators have to display.

Koos Stadler has been a career officer in the South African National Defence Force for more than 30 years. Twenty-four of these he served in the elite South African Special Forces, better known as the “Recces” – spending 10 years in active service during the long drawn-out guerilla war against the then South West Africa Peoples’ Organisation (SWAPO) on the border between Namibia and Angola. Stadler conducted many exceptionally sensitive missions, often facing extreme conditions of hunger, thirst, loneliness and danger. Fear was a constant companion and Stadler does not shy away from acknowledging this and sharing his innermost thoughts in the pages of Recce. He ended his career on a high note during a 4-year tenure as Defence Attaché to Saudi Arabia where he spent much of his time exploring the desert. During a 200 km solo hike through the Empty Quarter, one of the most barren stretches of sand on earth, he re-lived his small teams experiences and in his own words 'buried the last of his fears in the sand'.