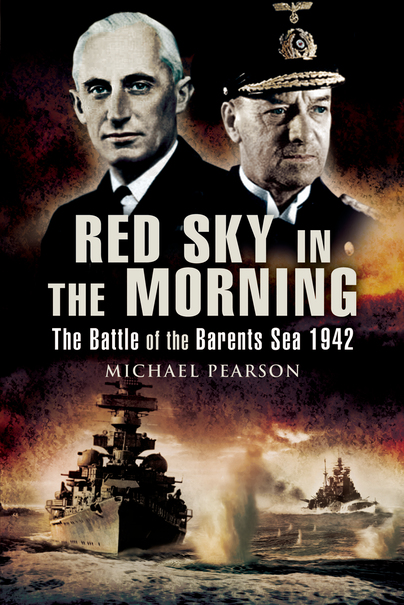 Red Sky in the Morning (Kindle)

The Battle of the Barants Sea 1942

Add to Basket
You'll be £4.99 closer to your next £10.00 credit when you purchase Red Sky in the Morning. What's this?
Need a currency converter? Check XE.com for live rates

The Arctic convoys that sailed through the cold malevolent waters of the Barents Sea ran the gauntlet of German air and sea attacks as they struggled to transport vital supplies to Britain's Russian allies.
Convoy JW51B sailed in December 1942 with a small close escort of five destroyers, plus a reserve of two light cruisers, which shadowed the main convoy at a distance of seventy miles. The convoy was attacked on 31 December by a powerful German force that included the heavy cruiser Admiral Hipper, the pocket battleship Ltzow and six destroyers. The ensuing engagement proved the worth of the British destroyers and the bravery of the men who sailed in them.
It was a naval engagement that had far-reaching consequences and resulted in many capital ships of the Kriegsmarine being decommissioned for the rest of World War II.
A gripping tale of the war at sea under the direst of conditions.