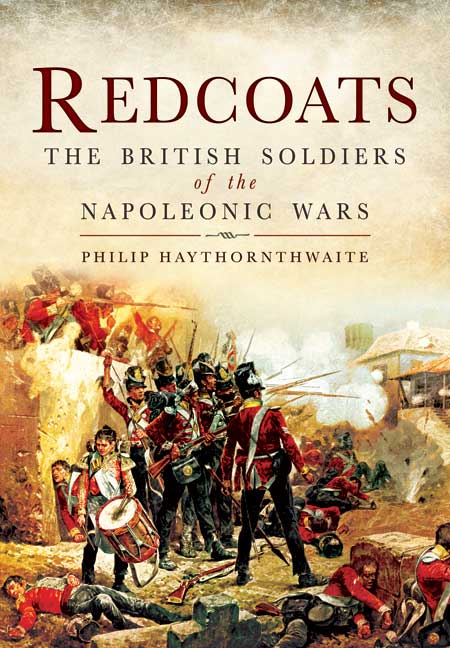 The British Soldiers of the Napoleonic Wars

Click here for help on how to download our eBooks
Add to Basket
Add to Wishlist
You'll be £4.99 closer to your next £10.00 credit when you purchase Redcoats. What's this?
Need a currency converter? Check XE.com for live rates

What was a British soldier’s life like during the Napoleonic Wars? How was he recruited and trained? How did he live on home service and during service abroad? And what was his experience of battle? In this landmark book Philip Haythornthwaite traces the career of a British soldier from enlistment, through the key stages of his path through the military system, including combat, all the way to his eventual discharge.

His fascinating account shows how varied the recruits of the day were, from urban dwellers and weavers to ploughboys and labourers, and they came from all regions of the British Isles including Ireland and Scotland. Some of them may have justified the Duke of Wellington’s famous description of them as the ‘scum of the earth’. Yet these common soldiers were capable of extraordinary feats on the battlefield that eventually turned the course of the war against Napoleon.

As well as describing the men and their backgrounds, Philip Haythornthwaite explains the workings of the complex military organization that took them in – the regimental system in particular – and the different types of unit in which they served. Using graphic contemporary testimony and records, he reconstructs the often miserable living conditions the men endured in barracks and camps. He looks at their diet, their social life, their opportunities for promotion and advancement, and at the harsh code of discipline that governed them. He considers, too, how these men interacted with the civilian population at home and on campaign overseas, and the experiences of their wives and children. He also records the confusion and terror of combat as it was seen by the ordinary soldier.

Throughout the book the author draws on his encyclopedic knowledge of the military history of the Napoleonic era to give an accurate insight into the lives and living conditions of British soldiers 200 years ago.

Redcoats is an engrossing book that moves along at a steady clip. It felt like I was sitting there listening to Mr. Haythornthwaite telling the story, rather than reading the words. It is reminiscence of John Elting’s Swords around a Throne. Both are full of information that leaves the reader wanting more. I highly recommend this to everyone interested in the Napoleonic Wars, even those who specialize in the British Army.

Now I can only hope that someone will step up and tell the story of the French soldier!

This is not just another book on the Napoleonic British army and their tactics. Using first-hand accounts, Haythornthwaite tells the story of the social, political and militaristic hardships that faced the average British soldier during warfare with Napoleonic France.

Straight from the mouths of those who were there, Philip Haythornthwaite has collated together a time capsule that covers all the aspects of the everyday struggles a soldier of the period was expected to put up with from under hand recruiting practices, barrack room life and incessant drill to facing down a far superior enemy based on the mettle that had been drilled into the soldier that the Duke of Wellington once infamously referred to as ‘that article over there.’

The soldier who fought for Britain against Napoleonic France was like no other before and no other after. This book tells their story and sheds light onto the factors that led to army reform in the following decades.

A very informative and readable account of the British soldier during the 1790s and early nineteenth century. The subject is covered in great detail, beginning with the military establishment, with the emphasis on the regimental system and how the regiments were organised. Each stage of the soldier's life is illustrated with graphic contempory accounts and stories pertinent to the subject which in themselves makes for a fascinating read.