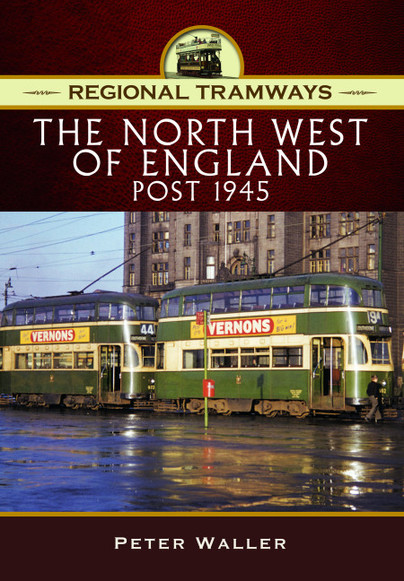 Add to Basket
Add to Wishlist
You'll be £25.00 closer to your next £10.00 credit when you purchase Regional Tramways - The North West of England, Post 1945. What's this?
+£4.50 UK Delivery or free UK delivery if order is over £35
(click here for international delivery rates)

This is the third in the 'Regional Tramways' series that covers the history of tramway operation in the British Isles.

Focusing on North-West England, the book provides an overview of the history of tramways in the region from the 1860s, when one of the pioneering horse trams that predated the Tramways Act of 1870 operated in Birkenhead (the first tramway to operate in the British Isles), through to the closures of the last traditional tramways (Stockport and Liverpool) in 1951 and 1957. It also looks at one great survivor the tramway in Blackpool that, fully modernized, continues to operate in the twenty-first century.

Concentrating on the systems that survived into 1945 Blackburn, Blackpool, Bolton, Bury, Darwen, Liverpool, Manchester, Oldham, Salford, SHMD and Stockport the book provides a comprehensive narrative, detailing the history of these operations from 1945 onwards, with full fleet lists, maps and details of route openings and closures.

The story is supported by almost 200 illustrations, both colour and black and white, many of which have never been published before, that portray the trams that operated in these towns and cities, and the routes on which they operated. Bringing the story up to date, the book also examines the one second-generation tramway built in the region Manchester Metrolink as well as informing readers where it is still possible to see surviving first-generation trams from the region in preservation.

This very comprehensive volume examines all the system in the North West England. Each system remaining in 1945 is covered in detail, but an introductory chapter also gives a valuable review from the earliest days of tramway operation in the region, covering both horse and the surprisingly extensive extent of steam-hauled operation, as well as the electrified systems from the late nineteenth century onwards.

Complete with route maps, this is the definitive history of Lancashire and north Cheshire tramways.

A very detailed work with an impressive visual file.

It is packed with information, but its crowning glory is those evocative pictures.

The third book in this magical series looks at the North West of Britain, including Liverpool and Manchester etc. I remember travelling on a tram in London when I was about five years old, that would have been in 1951/2, I should think, and the fascination I had then with these magnificent vehicles has never diminished. I don't envy those people who live in cities, especially those that have newly installed tramways, like Nottingham, but I do wonder what it would be like to be able to travel around such cities in these coaches. This is an important piece of social history, a brilliant series.