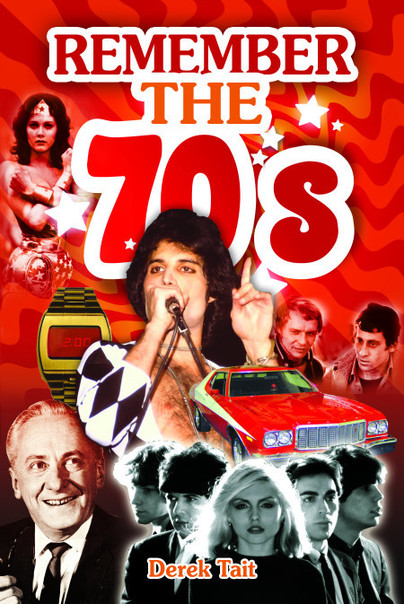 Click here for help on how to download our eBooks
Add to Basket
Add to Wishlist
You'll be £4.99 closer to your next £10.00 credit when you purchase Remember the 70s. What's this?
Need a currency converter? Check XE.com for live rates

When you think about the 1970s, what comes to mind? Flares? Queen? Rocky?

The 1970s was one of the most exciting, innovative and colourful decades of recent history. With major events in music, film and television, the introduction of new technology, and the rising tide of socio-political change, the decade played a key role in British social history.

This decade saw many memorable occasions: Kenny Dalglish became the most expensive footballer after a £440,000 transfer fee, Freddie Laker launched his budget Skytrain airline, Clive Sinclair launched the two inch television, the late 1970s saw the election of the country's first female prime minister, Margaret Thatcher, and during 1977, the country became enthralled by the Queen's Silver Jubilee - street parties were held up and down the land.

Remember the 70s explores this chaotic and pivotal by-gone era, and by doing so, the author uncovers hidden truths, gives insight into the dazzling array of inventions and the presence of popular culture, as well as remarking upon how these events, and how the decade as a whole, resonated until this very day.

****
Remember the 70’s? I certainly do. I won’t go as far as to say my age, but I was born in the 70’s (and more towards the beginning than the end!). So I can safely say, I do remember most of the 70’s! On looking, the author has written some great other books on subjects of bygone years which I’ll be looking at to read at a later date!
It does what it says on the tin – it explores the 70’s decade, giving insight into many of the things that happened during this time. It brushes on clothes, music, TV and film as well as an array of other things. It was really interesting to read through some of these and, whilst I knew of them and living through most of it, it was great to have my memory jogged for some of the names of people and places that have long passed me by – examples are Rumbelows (what ever happened to them?) and Bejam’s (which apparently is now Iceland!)

A good nostalgic read, as a child of the seventies I can just about remember especially the glam rock groups and the flares, cheesecloth etc.
Good read.

There's lots of nostalgic fun in this broad view of the decade.

Best of British, May 2018 - reviewed by David Brown

A fab, fact filled book, which is written in an engaging style.

Loosely divided into categories such as politics, news, sport, film, music etc. a fascinating series of memory joggers of that time. As it was the time of my youth it brought back so many memories and got me thinking of my own - family, friends and the days. From that point of view, hugely enjoyable.

I like books like this, so was pleased when the Publisher granted my wish and gave me a copy of the book. Also, on looking, the author has written some great other books on subjects of bygone years which I’ll be looking at to read at a later date!