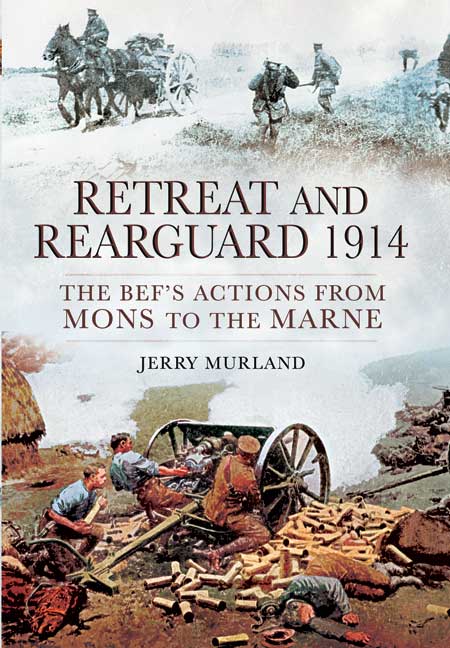 The BEF's Actions From Mons to the Marne

Click here for help on how to download our eBooks
Add to Basket
Add to Wishlist
You'll be £4.99 closer to your next £10.00 credit when you purchase Retreat and Rearguard 1914. What's this?
Need a currency converter? Check XE.com for live rates

The British action at Mons on 23 August 1914 was the catalyst for what became a full blown retreat over 200 blood drenched miles. In this fascinating book the Author examines eighteen of the ensuing desperate rearguard actions that occurred over the twelve days of this near rout. While those at Le Cateau and Nery are well chronicled, others such as cavalry engagements at Morsain and Taillefontaine, the Connaught Rangers' action at Le Grand Fayt and 13 Brigade's fight at Crepy-en-Valois are virtually unknown. We learn how, in the chaos and confusion that reigned, units of Gunners and other supporting arms found themselves in the front line.

The work of the Royal Engineers responsible for blowing bridges over rivers and canals behind the retreating troops comes in for particular attention and praise: likewise the sterling efforts of the RAMC. The fact that no less than 16 VCs were won during this historic Retreat shows that, even in these darkest hours, individuals and units performed with gallantry, resourcefulness and great forbearance. Extensive use of primary source material, including first-hand accounts, letters, diaries and official unit records, brings alive this delightful and informative account of an historic, if not victorious, chapter in our Nation's military history. It would make an excellent companion on a battlefield visit.

As featured in Nuneaton News.

Jerry Murland's style of the writing is lucid and logical and the book is thus very readable. I wish all books on the Great War were written to this standard

In this title, first published in 2011, the author looks at 18 of the ensuing rearguard actions that occurred over the 12 days of the retreat. While some of the actions, such as those at Le Cateau and Nery are well chronicled, others such as the cavalry engagements at Morsain and Taillefontaine, the Connaught Rangers’ fight at Le Grand Fayt and 13 Brigade’s struggle at Crepy-en-Valois are relatively unknown. The author explains how in the chaos and confusion, artillery units and supporting arms found themselves in the front line. The work of the Royal Engineers and the sterling efforts of the Royal Army Medical Corps are also highlighted. No less than 16 Victoria Crosses were won during this historic retreat, demonstrating the gallantry and resourcefulness of individuals in the most difficult of situations. In presenting his account, the author makes use of primary source material, including first hand accounts, letters, diaries and official records, presenting the reader with a complete picture of this historic military action. Ten maps, over 40 monochrome illustrations, text notes, a select bibliography and an index support the main text. There are also two appendices – the BEF order of battle August 1914, and the cemetery trail. The book would certainly serve as a useful companion on a battlefield visit.

I've always been a fan of reading something which will challenge presumptions, and in 'Retreat and Rearguard 1914', Murland has done just that. All in all, it is definitely worth a read for anyone who wants to delve a little deeper in the British story of 1914.

Jerry Murland is an ex soldier, mountaineering instructor and teacher. He is also the and author of the recent, and highly regarded Aristocrats Go To War. He brings the all rounder's approach to his analysis and history of wahat Basil Liddel Hart called "that thing apart", the regular British Army of 1914.

This is a period and a subject in which I have a particular interest; Murland's book is one I opened with particular relish and closed without finding disappointment. Like the best of current military historians the author has the ability to knit his narrative of events with truly apposite personal stories and accounts. Drawn from published and unpublished papers and accounts, they both colour his work and inform the reader.

Absurdly, the Pen and Sword's publicity release for the book describes the account of the 12 day, 200 mile, retreat from Mons as a "near rout, "over blood drenched miles". Murland gives the lie to such half baked blurb. Certainly, there was poor, broken, communication, certainly there were losses. Certainly much was poorly accomplished by officers at all levels in the fog of this new kind of warfare. Yet itt was a retreat imposed on the British, not least by the withdrawal of French flanking forces. Few retreats by `new', small, and learning, army, have been better handled, They were led by commanders experienced only in `small wars', and a larger irrelevant one on the South African veldt, untypical of either previous or following wars.

Like authors before Jerry Murland has underlined that,despite inevitable losses, the retreat from Mons and the rearguard actions en route to the outskirt of Paris was an impressive feat of arms. Rearguard and Retreat may not be the last word on the subject, but it will most certainly do until that, if ever, comes along. This is an essential book on the early days of the Great war;key reading for anyone interested in the British Army of in 14, its abilities, its flaws, its officers , and the bloody minded men in its ranks.

For their comparatively small size, the British Official History of military operations dedicates more space to the battles of 1914 than any other period. It dedicates as much attention to the actions of battalions as it does to entire Divisions in the final Allied offensive of 1918. Yet it also manages to miss, or give short shrift to, several localised and numerically small actions that proved to be of crucial importance in the British withdrawal from Mons and the long slog southward that ended with a crossing of the Marne in September 1914. There is a gap to be filled and Jerry Murland's "Retreat and rearguard" does it well: it comprises a series of vignettes that go a long way to explaining these actions and improving our understanding of the nature of early war experience of the "Old Contemptibles".

Drawing on a wide range of sources - many personal accounts having not hitherto been published - and illustrating them with some clear maps, Murland describes battalion-sized actions at, amongst others, Audregnies, Le Grand Fayt, Etreux and Nery, along with many other instances of small unit rearguards, and setting them in the context of the overall retreat. The description of fighting is down at tactical, individual level although set in context of bigger things. The book illustrates that while it was exhausting and at times perplexing, the retreat did not descend into chaos and at times the BEF gave the advancing Germans a sufficiently bloody nose to hold them off and buy precious time. This was achieved at no little cost, with several units suffering terrible casualties.

A good book, well worth buying especially if you have an interest in the war's early phases.

…is to be congratulated on producing a book that combines excellent sketchmaps of specific actions and a broad selection of photographs with descriptions that bring the often chaotic 200-mile retreat to life.

This excellent work only narrowly missed being the Editor’s Choice this month and covers the eighteen desperate rearguard actions which occurred over the course of twelve days. Whilst some are well chronicled, others are little known and the author has done a first-class job in bringing them all together with extracts from first-hand accounts, letters and diaries.
Add this to your collection.

Murland has made a fantastic contribution to the history of the BEF on the Western Front. Impeccably researched, it is based on a wealth of primary and secondary material. In particular I was very impressed with the maps, which really helped to gain a feel for the battles of August 1914. He has dealt very well not only with giving a full and insightful narrative of the campaign, but has also shed light on often overlooked areas – the relations between French, Haig and Smith-Dorrien, and between French and Joffre and Lanzerac; the myth that the BEF’s marksmanship was so rapid that the Germans thought that every man was armed with a machine gun; and he has also given new prominence to the sterling work of the gunners and sappers during the retreat.