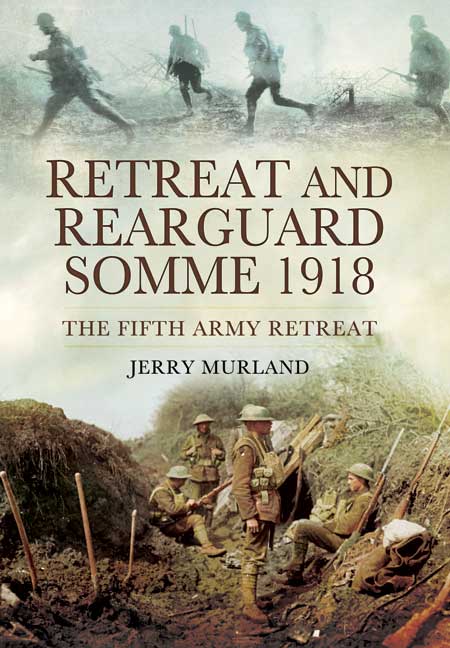 Click here for help on how to download our eBooks
Add to Basket
Add to Wishlist
You'll be £4.99 closer to your next £10.00 credit when you purchase Retreat and Rearguard - Somme 1918. What's this?
Need a currency converter? Check XE.com for live rates

The German Spring offensive or Kaiserschlacht was a period of great danger for the Allies. Both sides were exhausted after years of bitter fighting and huge losses. While eventually catastrophically unsuccessful and the prelude to their final defeat, the Germans forced the Allies back over hard-won ground until the tide turned.

Historian Jerry Murland has researched and visited the scenes of desperate actions during late March 1918. He describes in graphic detail the battles fought by British, Irish and South African regiments in the area from St Leger in the North to La Fere in the South. He unearths the extraordinary stories of unit and individual courage. He also examines the work of the Royal Engineers who blew bridges and disrupted lines of communication.

This original approach covers battles that in many cases have only been described briefly in official histories. The book is a useful companion for any battlefield visitor.

A highly readable account which demonstrates that, in an episode in the Great War often portrayed as an easy victory for the new German Storm Troopers and their assault methods, the BEF may not have performed poorly everywhere.

Murland draws heavily on personal testimony to tell the story. It is one of fighting often outnumbered, outgunned and always against the odds. The Somme and Passchendaele are seared in Britain's collective memory of the First World War - with good reason. But so too should the likes of St Quentin, La Fere and Epehy where the fighting abilities of the British Tommy were tested to the limit against their adversaries clad in field grey. Thanks to Murland, these stories have not only been told, but told with authority to give these lesser-known battles the significance they warrant.

The author has painted a vivid picture of the actions on the Somme in 1918. He has brought out the unit and individual courage, the terrible conditions, and given graphic detail of the British, Irish and South African regiments.

This is a well constructed account, one of the best I have read on March 1918 since Middlebrook's classic account, and it is well supported with material from a number of sources, including the National Archives.

Chris Baker, author of The Battle for Flanders

An extremely well written book. An interesting subject regarding the German advance over previously hard fought over ground and the effects on outnumbered allied troops who often paid with their lives when having to go from the offensive to defensive positions. I liked it.

Good concise account of the travails of the British Fifth Army as it faced the onslaught of the first of the German Spring Offensives of 1918. It is has the great merit of being clearly written. I particularly like the mix of the description of events with personal details of what happened to some of the key players.

I know how long it can take to research a single action let alone an entire Army's retreat and Jerry Murland does a great job. He's an experienced author with a number of First World War titles under his belt and so he knows what he's doing and he does it well. The book, of course, is up to Pen & Sword's usual high production standards. You still can't beat the look, smell and feel of a good book, especially one that's both compelling and authoratitive. Top marks.

A good, concise and clearly written account of a neglected battle.