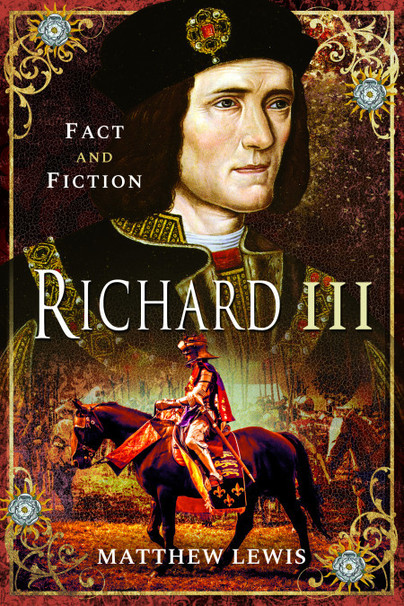 Click here for help on how to download our eBooks
Add to Basket
Add to Wishlist
You'll be £4.99 closer to your next £10.00 credit when you purchase Richard III. What's this?
Need a currency converter? Check XE.com for live rates

King Richard III remains one of the most infamous and recognisable monarchs in English or British history, despite only sitting on the throne for two years and fifty-eight days. His hold on the popular imagination is largely due to the fictional portrayal of him by William Shakespeare which, combined with the workings of five centuries of rumour and gossip, has created two opposing versions of Richard. In fiction he is the evil, scheming murderer who revels in his plots, but many of the facts point towards a very different man.

Dissecting a real Richard III from the fictional versions that have taken hold is made difficult by the inability to discern motives in many instances, leaving a wide gap for interpretation that can be favourable or damning in varying degrees. It is the facts that will act as the scalpel to begin the operation of finding a truth obscured by fiction.

Richard III may have been a monster, a saint, or just a man trying to survive, but any view of him should be based in the realities of his life, not the myths built on rumour and theatre. How much of what we think we know about England’s most controversial monarch will remain when the facts are sifted from the fictions?

"This is a comprehensive collection of information about Richard III together with ‘little known facts’ about him and the times he lived in."

I found this book interesting and a good ‘dipping into’ book. It challenges preconceived myths about Richard while being honest about his weaknesses.

No matter what your opinion of Richard III is, love him or hate him or maybe you lay somewhere in between, I would strongly recommend reading this book. It will bust some commonly held myths that have built up about Richard III over the centuries, most coming from Shakespeare’s famous play. It will also give you lots of information, some quite eye-opening, about who Richard III really was.

This is a concise and entertaining book describing the life and times of Richard III, drawing on unbiased and non judgemental picture of this king. Matthew Lewis's account is readable and filled with interesting facts and details. The book aims at debunking the myths and trying to reach reasonable conclusions. Nice quick read.

Lewis focuses on making Richard more human rather than either a vile villain or a knight in shining armor. This is what I appreciate about Lewis and his approach to Richard III. He makes the study of Richard III approachable for those who want to study about the man, not the black or white myths. With this particular book, I couldn’t put it down. I found extremely enjoyable and overall fascinating. If you want a book that brings the fictional tales and examining the facts about Richard III, I highly recommend you read Matthew Lewis’ latest book, “Richard III: Fact and Fiction”. It is a re-evaluation of the facts that Richard III deserves.

The informed and informative result of remarkably painstaking and meticulous research that is deftly organized and presented so as to be of especially impressive value to scholars and non-specialist general readers alike, this edition of "Richard III" by Matthew Lewis will prove to be an enduringly popular addition to community and academic library late Medieval English Biography collections in general, and King Richard III supplemental studies reading lists in particular.

If the final years of war of the Roses are of interest then i would, Recommend this book, most of the time it is great discussion of Richard-iii

Richard III Fact or Fiction was well-written, well-researched, informative, enjoyable read... Once again Matthew Lewis has written another utterly fascinating and all-around brilliant history book. I would definitely recommend this book to anyone who has an interest in this period of British history or an interest Richard III.

Although I’ve already read a lot about Richard III, there was enough new information in this book to keep me interested; for example, I can’t remember having read anything before about Richard’s dispute with Thomas Stanley over the ownership of Hornby Castle, which could be one reason for Stanley’s treachery at Bosworth fifteen years later. However, I think this book would be a particularly good choice for someone who knew much less than me about Richard III and was looking for a place to start learning. The way the book is divided into short sections, with each question and answer followed by a ‘Little Known Fact’ and a brief Glossary picking out one or two words which might be unfamiliar to the reader, makes it easy to read and to digest what we are being told. There are also lots of pictures interspersed throughout the text, including some of the author’s own photographs of castles and monuments from his private collection, which I thought added a nice personal touch.

To me, the history of the Plantagenets and the Tudors, is the original story of the Game of Thrones. Richard the III, thanks to stories passed down and to William Shakespeare, is the ultimate villain, hated by all, physically deformed, and the devil reincarnate. Matthew Lewis sets out to educate us all that these stories are mostly just that, stories. Perhaps history simply needed a truly vicious figure, and Richard the III was always it. Stricken with a bad case of scoliosis, which got worse with age, he supposedly looked the part. Not only is this very short book (only 127 pages) simply beautiful to look at, inside, the pages are a lovely gloss filled with wonderful and historic photographs. But did he have anything to do with the supposed murders of the boys in the tower. I guess we’ll never truly have that answer.

HE’S been portrayed as one of history’s biggest baddies – and Shakespeare shares the blame for that.
But now historian and author Matt Lewis is out to right the wrong done to Richard III, who was killed on the field of battle at Bosworth and buried under a car park. Although of course, it wasn’t a car park back in 1485.

In his book “Richard III” 42-year-old Matt, of Six Ashes, near Bridgnorth, seeks to separate the fact from the fiction surrounding one of the most notorious monarchs in history.

I really enjoyed this book. I liked the way that it was set out in sections so you could easily dip in and out of it, perfect for those who want to know more but don’t have the background. If you’ve watched ‘The White Queen’ and want to know more about Richard, I’d recommend this book as it clearly separates fact from fiction without assuming the reader is a complete ninny. Some books, in trying to set things out clearly, simplify the facts too much, but Lewis doesn’t make this error.

There is so much written about Richard III (good and bad), so it can be difficult to know where to begin or to know whether you are reading a balanced and unbiased account. This book, however, is a great place to start learning about one of British histories most controversial figures. The book has short and snappy chapters but still weaves together detailed facts with an easy to follow narrative. -

I liked how the book looks at Richard from different perspectives, particularly the parts that discuss what influenced Shakespeare to portray Richard as the infamous villain that has come to dominate popular opinion. The burning question you all want an answer to (did Richard kill the Princes in the Tower?) is also discussed in the book! There’s also a great collection of the author’s own photographs throughout the book.

I think any of you interested in the Wars of the Roses and the Tudors would really like this book.

Matthew Lewis’ writing was easy to read and meant that I was actually learning when reading this book. I found it very interesting and really enjoyed the layout... This book definitely deserves a lot of attention as it provides a lot of insight into Richard III despite it being only 127 pages long! If you have any sort of interest in British history, including the British monarchy then definitely pick this book up! I highly recommend it to lovers of history & non-fiction.

The last king of the House of York and from the Plantagenet dynasty, Richard was defeated in the Wars of the Roses, and is perhaps known best as the protagonist of William Shakespeare's play Richard III in which he is portrayed as a dark and twisted monarch.