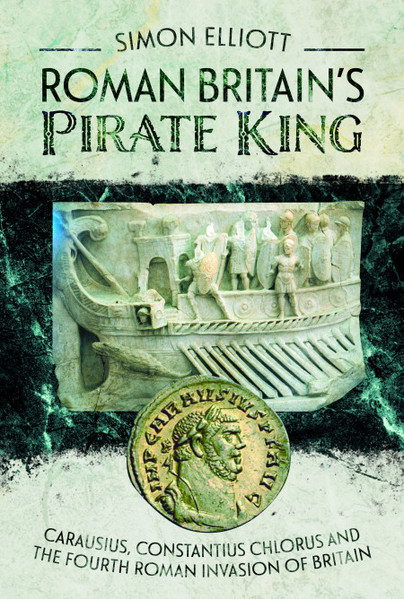 Carausius, Constantius Chlorus and the Fourth Roman Invasion of Britain

Click here for help on how to download our eBooks
Add to Basket
Add to Wishlist
You'll be £9.98 closer to your next £10.00 credit when you purchase Roman Britain's Pirate King. What's this?
Need a currency converter? Check XE.com for live rates

In the mid-3rd century AD Roman Britain’s regional fleet, the Classis Britannica, disappeared. It was never to return. Soon the North Sea and English Channel were over-run by Germanic pirates preying upon the east and south coast of Britain, and the continental coast up to the Rhine Delta. The western augustus (senior emperor) Maximian turned to a seasoned naval leader called Marcus Aurelius Mausaeus Valerius Carausius to restore order. He was so successful that Maximian accused him of pocketing the plunder he’d recaptured, ordering his execution. The canny Carausius moved first and in 286 usurped imperial authority, creating a North Sea empire in northern Gaul and Britain which lasted until 296. Dubbed the pirate king, he initially thrived, seeing off early attempts by Maximian to defeat him. However, in the early 290s Maximian appointed his new caesar (junior emperor), Constantius Chlorus (the father of Constantine the Great), to defeat Carausius. A seasoned commander, Constantius Chlorus soon brought northern Gaul back into the imperial fold, leaving Carausius controlling only Britain. Carausius was then assassinated and replaced by Allectus, his treasurer. Allectus was in turn defeated by Constantius Chlorus in AD 296 in the fourth Roman invasion of Britain, the caesar arriving just in time to prevent London being sacked by Allectus’ Frankish mercenaries. Once more Britain was part of the Roman Empire.

I found out a lot of information about the last century of Roman Britain that I didn’t not know.

I have been a student of Roman History for a long time. This well written and extremely interesting story of the Northern reaches of Rome and its intrigues is new reading for me. The amount of history known about the people who lead the empire in the late 200s onward is very surprising to me. The thousands of lives involved in this story and the battles and unheard of struggles discussed make this book important reading because of the fact its not well known and its real history that can be corroborated with many remaining records and histories that have survived, Roman Britain is a fascinating subject and this book adds a new level to those who learn from the past.