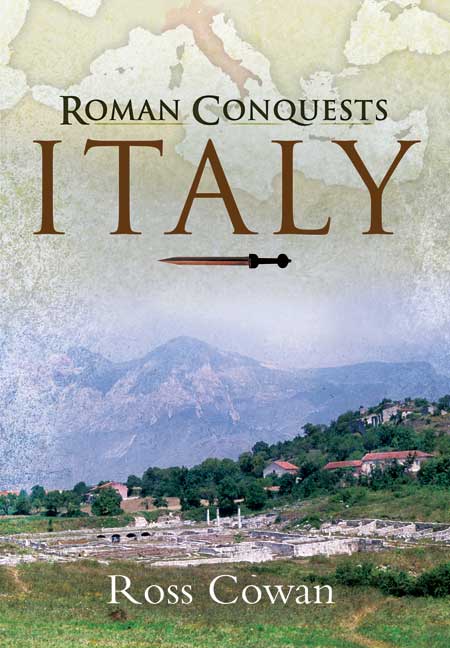 Click here for help on how to download our eBooks
Add to Basket
Add to Wishlist
You'll be £4.99 closer to your next £10.00 credit when you purchase Roman Conquests: Italy. What's this?
Need a currency converter? Check XE.com for live rates

Recounts the desperate struggles for survival of the young Roman republic

Describes how and why Roman Armies eventually beat their Etruscan, Samnite, Celtic and other neighbours to dominate all of Italy

Discover how the Roman legion fared in its first battles against Hellenistic pike phalanxes and war elephants.

"For who is so worthless or indolent as not to wish to know by what means... the Romans have succeeded in subjecting nearly the whole inhabited world to their sole government- a thing unique in history? Or who again is there so passionately devoted to other spectacles or studies as to regard anything as of greater moment than the acquisition of this knowledge."
POLYBIUS, 2ND CENTURY BC

This book provides a well researched, well written account of early Roman warfare. Persons interested in the military history of the Roman Republic should have it on their shelves.

The rise of Rome from city state to world empire is a fascinating story. The Romans had their own myth of origins, but the reality is of determined and continual was of expansion from around 400 BC until the creation of the principate by Octivian-Augustus in 27 BC and then for another century afterwards. The first rivals were the Etruscan cities and Cowan's excellent study takes the reader through the complex series of campaigns, above all the Samnite Wars, in which Rome eventually triumphed. The text is well-supported by half-a-dozen black-and-white maps and a good section of illustrations, including four high-quality colour plates depicting foot-duels between Romans, Gauls, Etruscans and a Tarentine warrior, making the book suitable for those just interested in history and also anyone interested in the wargaming potential.

The second volume is much broader in geographical and historical context and the political situation covered is also more complex; but this is all well explained by the author. There were three wards, two against Macedon and one against the Seleucid regional-power ruled by Antiochus. Roman victories in battle, especially Cynoscephalae (197 BC) proved their legionary system to be superior to the long-dominant Macedonia phalanx owing to the flexibility of its formation and equipment of its soldiers. Again there are useful maps and a full-colour photographic section featuring some atmospheric shots of the battle sites and four colour plates of troop types (including a magnificent war-elephant).