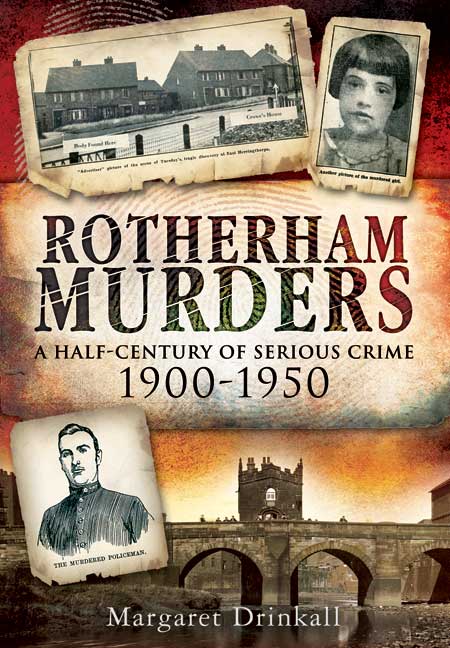 Click here for help on how to download our eBooks
Add to Basket
Add to Wishlist
You'll be £4.99 closer to your next £10.00 credit when you purchase Rotherham Murders. What's this?
Need a currency converter? Check XE.com for live rates

Set in a social backdrop of recovery from two world wars, Margaret Drinkall's Rotherham Murders concentrates on killings that took place in and around the town during the first fifty years of the twentieth century. Most of her cases have not been written about in recent years, but are now investigated and told by a modern crime historian. Read about the brutal death of a policeman, a sensational 'body in a trunk' murder which resulted in Scotland Yard detectives coming to Rotherham and the very first wireless appeal for helping catching the culprit. Other sad and foul deeds include mothers killing their own children, an unusual tansvestite case, an early motoring crime and a gamekeeper's grim revenge. Not for the feint-hearted, these cases will both shock and astonish in equal measure, true stories set within one of South Yorkshire's most important industrial towns.

Rotherham Murders is a true account of the brutal killings that have took place in this South Yorkshire town during 1900 to 1950, the war years. Killings such as, the body in the trunk murder, which even got Scotland Yard involved and became the first wireless appeal for a murder in Britain, brutal murders of children by their own mothers, a strange case of a transvestite been beaten to death by a man he had humiliated, motoring crimes, an attempted murder at Hoober Stand in the village of Wentworth and a rather strange case of two game keepers attempted murder and revenge against a poacher.

Local historian Margaret Drinkall. with help from her son Chris Drinkall who supplied help with the photographs, and with much help from the Rotherham Advertiser and the journalists who worked first hand on these stories, Drinkall has gathered together here a book which gives you an insight into life, working in Rotherham and the main topic of this book the murders that happened in Rotherham in the first hand of the 20th century. At times she has had to use her own judgement on some of the stories but for this she does apologize, with pictures of the Rotherham area and images of the victims and suspects, this book is a must read for fans of true crime.

Today a lot us are enthralled by a lot of the crime dramas offered by American and British TV, with may of us doubtful that people could commit such appalling crimes, Margaret Drinkall's latest book, however, about serious crimes committed in and around Rotherham will definitely change you view. Rotherham Murders: A Half-Century of Serious Crime 1900-1950 is one of the best true crime books available today, with in-depth and often disturbing details about some of the most horrific crimes to occur within Yorkshire. From the first account to the last Drinkall has written a well researched book that offers an unbelievable amount of detail for each crime, from the very first act committed to the final court announcement. No crime drama offered on TV can compare to this brilliant read, which offers harrowing real life stories that is easy to read whilst maintaining an unbelievable amount of detail. After reading this chilling book, the most concerning and exciting aspect I took away was that all of this crimes occur where I live, I have walked down Gerard Road where members of the Taylor family were murdered, which only brings the book more alive for me. I read this book in one day and would highly recommend this book for anybody who lives for their weekly modern crime dramas will be engrossed in this fantastic book.

Not for the feint hearted, these cases will both shock and astonish in equal measure, true stories set within of of south yorkshire's most important industrial towns.