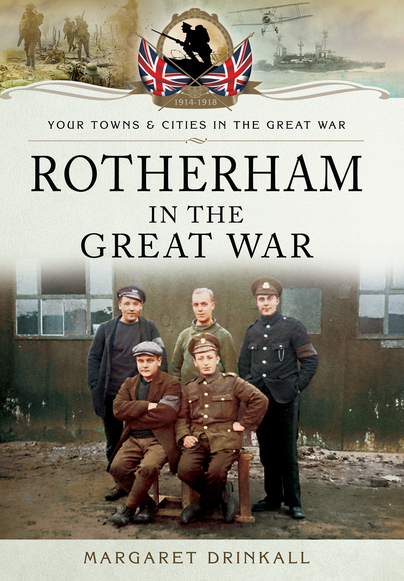 Rotherham in the Great War (Kindle)

Click here for help on how to download our eBooks
Add to Basket
Add to Wishlist
You'll be £4.99 closer to your next £10.00 credit when you purchase Rotherham in the Great War. What's this?
Need a currency converter? Check XE.com for live rates

Many Rotherham men had never fired a shot in their lives before they enlisted, to fight in what quickly became known as the Great War. Some of them had never travelled further than Sheffield or Doncaster and had only used lathes and ploughshares, prior to conscription. Now those same men were suddenly thrust into the mayhem of battlefields, trenches, violence and destruction. Whilst fathers, brother and sons were fighting abroad, Rotherham townspeople, found themselves in the midst of anti-German riots which took place on the weekend of Friday 14th May 1915. Violence and revenge was turned towards former neighbours and friends who were of German origin, even though they had lived peaceably in the town for many years. Reports of attacks by zeppelins resulted, not in local people taking shelter as was recommended, but rather taking to the fields and parks, often lifting children out of their beds to view these 'monsters' of the sky. The few lucky men and women who returned back to the town, found that life in Rotherham would never be the same again.

Fascinating reading for people with Rotherham roots, or for military and social historians.

As seen in the Rotherham Advertiser.

As seen in the Sheffield Telegraph.