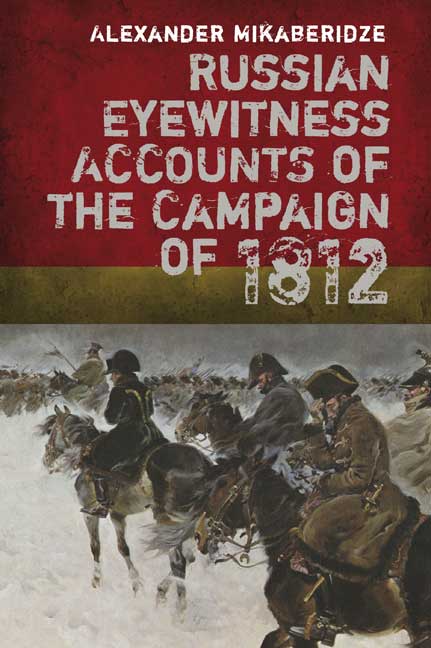 Russian Eyewitness Accounts of the Campaign of 1812 (Hardback)

Add to Basket
Add to Wishlist
You'll be £25.00 closer to your next £10.00 credit when you purchase Russian Eyewitness Accounts of the Campaign of 1812. What's this?
+£4.50 UK Delivery or free UK delivery if order is over £40
(click here for international delivery rates)

Order within the next 10 hours, 24 minutes to get your order processed the next working day!

Russia played a decisive role in the Napoleonic wars and the success in the struggle against France allowed Russian leaders to shape the course of European history.

Over the last 200 years, the Napoleonic era has been discussed and analyzed in numerous studies, but many fail to fully portray the Russian side of the events due to the relative scarcity of Russian sources in English. Only a handful of Russian memoirs (e.g. those of Alexey Yermolov, Nadezhda Durova, Denis Davydov and Eduard Lowernstern) have been translated in English while dozens remain unknown outside Russia. This book seeks to fill this gap by providing, in English, previously unavailable memoirs of Russian participants.

Each chapter deals with an important episode of the 1812 campaign and featuring dozens of memoirs, letters and diaries. These documents show the other side of the proverbial coin, providing an unique insight on the Russian leadership, how and why decisions were made and what a common Russian soldier experienced as he slowly progressed towards victory. The author is an acclaimed writer who has won the International Napoleonic Society's Legion of Merit Award for his contribution to Napoleonic studies.

This title, first published in 2012, compiled, translated and edited by Alexander Mikaberidze seeks to at least partially correct a perceived paucity of works portraying the Russian side of events during the Napoleonic Wars. Despite the important role of Russia in the conflict, only a handful of Russian texts have been translated, while apparently dozens remain unknown outside Russia, but here the author has provided translations of previously unavailable memoirs of Russian participants. Following a foreword by John H Gill, each chapter focuses on one important episode of the 1812 campaign and features numerous memoirs, letters and diaries. There are first-hand accounts of the initial Russian retreat, the fall of Smolensk, the battle of Borodino and the retreat of the disintegrating French army from Moscow. What these accounts offer is a new insight into the decisions made by the Russian commanders, the early war dissension within the command and just what the common soldier experienced in the course of the campaign. There are 32 monochrome illustrations, 16 in colour and one map of the campaign. Finally, a list of sources and an index round off the text. This really is a fascinating and absorbing work which is a most useful addition to the Napoleonic bookshelf.

The book is set around the key events of the 1812 campaign and these are covered over eight chapters. Each contains excerpts from more than forty diaries and memoirs, letters, the orders of the generals involved and various official documents. The book obviously is not a full account of the campaign, nor is it intended to be. However, each chapter gives a short summary of what led up to the events described in it by the various participants and observers. These are helpful in setting the context.

Of course, one of the great things about such collections of anecdotes and memoirs is the universalities of military types and how men cope (or don’t cope) under the stresses of combat.

This excellent collection is supported by a single map at the front which provides a broad orientation to the reader, and shows the key locations referred to in the eyewitness accounts. There is also two excellent sets of paintings. The first, in black and white, is largely of the various personalities whose accounts we are reading, with a few “action” scenes. These paintings are informative. The second set is in colour and depicts scenes of combat. They really create the scene visually for the many combat sequences in the book.

Russia played a decisive role in the Napoleonic wars and their success in the struggle against France allowed Russian leaders to profoundly influence the course of European history. And yet of the tens of thousands of books written in non-Russian languages on this crucial period, very few have examined in detail the many dimensions of Russia’s long involvement with Revolutionary and Imperial France.

Alexander Mikaberidze makes a brilliant job here of putting the records straight, changing our assumptions and readjusting our analytical frameworks in this gripping translation of the accounts of the Russian soldiers who fought in and witnessed the pivotal 1812 campaign.

Mikaberidze deploys the evidence of a rich collection of observers, including diplomats, courtiers, junior officers, generals and a lone sergeant, to bring us a new perspective on what was a ‘gargantuan’ campaign.

The graphic accounts provide a fascinating insight into the decisions of the Russian leadership, the dissension within the command in the early part of the campaign and the horrific experiences of the ordinary Russian soldier as he slowly made his way to victory.