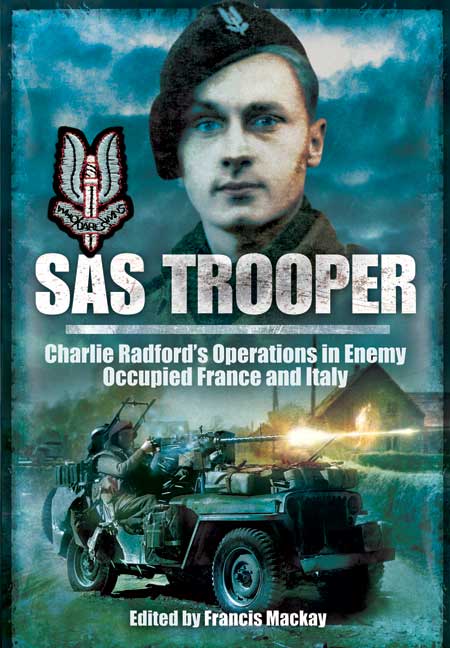 Click here for help on how to download our eBooks
Add to Basket
Add to Wishlist
Get SAS Trooper (Kindle) for FREE when you purchase 2 other eBooks.
Need a currency converter? Check XE.com for live rates

A pre-war Sapper, Charlie Radford served in North Africa until he returned to the UK for parachute training. He volunteered and joined 2SAS in Scotland. His first behind-the-lines operation was in France (Op RUPERT) cutting railway lines and he then took park in Operation LOYTON, now in armed jeeps. His next assignment (Operation ZOMBIE) involved parachuting into the Italian Dolomites to disrupt the vital German link North of Verona between Italy and Austria.

This operation ended in failure due tofool hardy leadership, inadequate manning and poor preparation. His OC was captured, tortured and executed but Charlie escaped to live with the Partisans before being repatriated to the UK. After the war he returned to France to help with the exhumation and reburial of SAS men executed in the Vosges mountains. Postwar he served in Kenya and Somaliland and his experiences there form an interesting epilogue.

But SAS Trooper is first and foremost a thrilling account of Special Force soldiering told from the perspective of a young man who more than did his duty under the most testing conditions. Those who imagine that this was a glamorous role in war need only read of the shortcomings of preparation and leadership that led to the disastrous failure of Operation ZOMBIE and the hardships and dangers of fighting with the ruthless Partisans in the Dolomites.

Francis Mackay has edited Charlie Radford's wartime autobiographical notes to form this very readable volume. Mackay is well suited for the task being both an established military and SAS author as well as an expert on the ground on which Charlie's Italy SAS operations took place. As a reader of Mars & Minerva the chances are that you have already read some of Charlie's work and therefore have a good idea of the quality of his writing. Charlie contributed many articles to this journal over the years and if you ever had the added pleasure of receiving letters from him then you will also understand fully why this book was crying out to be written. Like his letters the text is laced with self-effacing humour, accurate historical and linguistic references, enlightening social commentary, and level headed (and refreshingly honest) assessments of his wartime experiences of the SAS.

Charlie's narrative briefly takes us through his early life, then his boy service as an apprentice fitter in the pre-war Royal Engineers,, before his first combat experiences in Tunisia where he cleared mines and was witness to the surrender of the Afrika Korps. A brief interlude in Egypt training for amphibious operations is followed by para training in the UK and his transfer, in March 1944, to 2nd SAS.

Charlie paints a vivid picture of the political as well as the personal aspects of the wartime unit, the equipment used, and the training that he received. These are the good grounding for the adventures he relates concerning Operation RUPERT in France and the Operation COLD COMFORT/ZOMBIE in Italy.

The story does not end with the disbandment of the Regiment but continues with his post-war postings in Africa back with the Royal Engineers. Much to his credit Mackay has also included Charlie's notes on his modern day Association and privately organised pilgrimages. These underline just how proud Charlie was of the Regiment as well as his genuine interest in its history and welfare.

AAs this book was written by Charlie anyone interested in the unit will, without doubt, find this amusing and engrossing. Whilst it makes the reader wish that Charlie were alive to see it in print for himself it also makes him grateful that Francis Mackay has put it together for our benefit.

SAS Trooper is a fascinating read for its realistic portrayal of war and life in Teignmouth in the 1920s and 30s.

This book is a must read for anyone interested in the SAS of WW2.
It is also an excellent companion to the other new release the SAS in Tuscany.