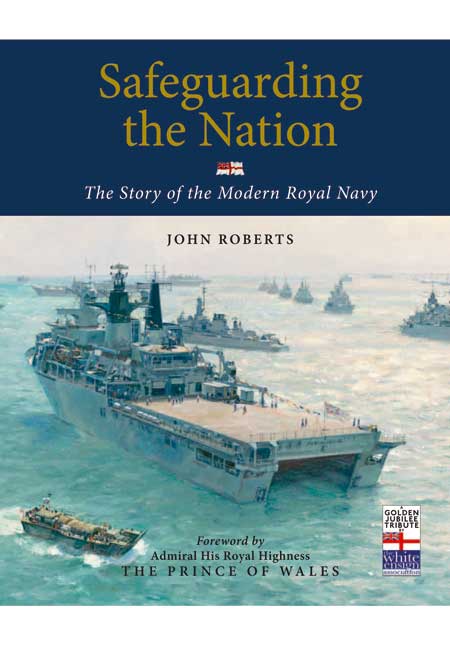 The Story of the Modern Royal Navy

By John Roberts, Foreword by HRH The Prince of Wales, Introduction by Lord Boyce

Click here for help on how to download our eBooks
Add to Basket
Add to Wishlist
You'll be £9.00 closer to your next £10.00 credit when you purchase Safeguarding The Nation. What's this?
Need a currency converter? Check XE.com for live rates

This new history of the Royal Navy, published to coincide with the Golden Jubilee of the White Ensign Association, is a full and exciting account of all the many campaigns, operations and deployments conducted around the world from the Cold War and the Cod Wars to the Falklands War and the Gulf Wars. It has been written and compiled from privileged access to secret and confidential Admiralty Plans and Commanding Officers' reports and contains a wealth of previously unpublished material.

The story of how the Royal Navy has adapted to meet the many new challenges of the modern world and how it has carried out its vital roles from manning the nation's strategic nuclear deterrent to guarding the vital offshore oil and gas facilities as well as protecting Britain's worldwide interests is a truly fascinating one, while the development of ships, submarines, aircraft, weapons, tactics and strategies as well as the changes in personnel and life at sea are brought to life by contributions from people who served over the period.

Profusely illustrated throughout with many previously unpublished photographs and paintings, this beautifully-produced volume is a magnificent golden jubilee tribute to the Royal Navy.

This book vividly recounts the Royal Navy's history over the last 50 years, and it's surprising how much there is to tell.

This is not a book to sit and read from cover to cover. I recommended reading one chapter at a time, but mostly I recommend adding it to your library.

The story of what the Royal Navy has achieved over the last fifty years is both a fascinating and proud one.