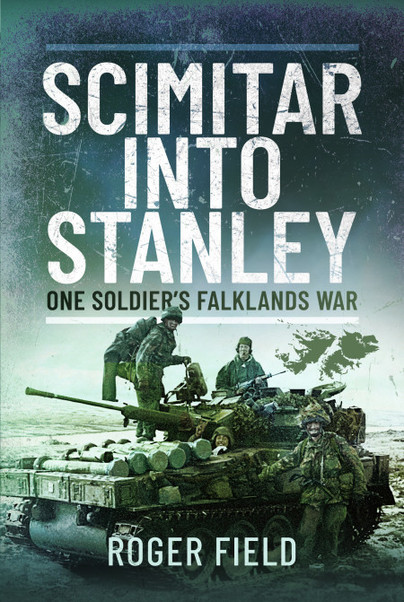 Add to Basket
Add to Wishlist
You'll be £20.00 closer to your next £10.00 credit when you purchase Scimitar into Stanley. What's this?
+£4.50 UK Delivery or free UK delivery if order is over £40
(click here for international delivery rates)

In May 1982, Captain Roger Field, The Blues and Royals, attached to HQ 5th Infantry Brigade, sailed on the Queen Elizabeth 2 as part of the second wave to liberate the Falkland Islands. Surprised by what he saw at Brigade HQ he started writing a diary.

His journey took him to Fitzroy as the Argentinean aircraft struck the landing ships Sir Galahad and Sir Tristram. A chance meeting led to him joining the Commanding Officer of 2 Para for the Battle of Wireless Ridge. When the Paras lost the commander of one of their four The Blues and Royals armoured cars part way through the battle Roger took command of that Scimitar. He fought the rest of the battle from the turret. Next day his Scimitar was at the very tip of the spear as 2 Para and The Blues and Royals led the victorious charge into Port Stanley; Max Hastings hanging onto the back of his vehicle.

‘Revisionist’ in places and always refreshingly candid, this account is unique as it describes the War from the viewpoint of a staff officer, infanteer and armoured vehicle commander. A gripping read.

This is a great read due to the style in which it is presented that makes for a book that makes you want to follow the story. Fun and frolics are covered along with death and destruction, and I think everyone who has served or knows someone who has served will see something of the person they know in this story. If you ever meet the author give him a sip of Whisky as it may take him back to another place and a younger person with more of a story to tell.

"Scimitar Into Stanley is a fascinating book which begins by displaying all the frustrations of a staff officer in a rather dysfunctional headquarters, with no proper role and no one listening to him; and it ends with the author in the frontline. Roger field also concedes that the Falklands changed his life; war has an indelible effect on people. Nothing is ever quite the same again."

Highlights: 'For those who survived, the conflict was a defining moment in their personal and professional lives. These reflections on the campaigns end are in their own words...'
'Originally destined to spend his time down south manning a radio, the author ended up at the sharp end of fighting… a journey he tells with a mixture of thoughtfulness, humour and irreverence. Field’s later career in the worlds of journalism and publishing is evident throughout in the engrossing style of the narrative.'

Highlight: 'As an honest account of one young officer’s war it is an invaluable addition to the history of that campaign and while some civilian readers may not entirely appreciate the army humour, it is highly recommended.'

If you want to know how the Falklands War on the ground felt, in its raw intensity, then this is the book for you.

As featured in the article: 'Shooting and fishing in the Falklands'

An excellent telling of one officer’s war.
An insightful view, delivered in an honest and calm manner.
Neatly ties together many of the strands from other books with a regimental or battle site focus.
A must read for anyone who has a genuine interest in the events of 1982.

This gripping and frank account of the Falklands War is based on the 12,000 word and contemporaneous diaries of The Field's Roger Field, who saw active duty whilst serving as a captain in The Blues and Royals, attached to HQ 5th Infantry Brigade. It will be welcomed by military folk and civvies with an interest in modern history.

Field is refreshingly open. Prefixing the story with how he felt it was important to speak candidly, he writes with honesty rather than with an axe to grind; his tone is natural, almost conversational, amusing and devoid of literary pretence. Much is relayed in the first person, and interspersed with original diary entries, which gives an immediacy and an excitement to the narrative.

Not that it needs added colour: from his account of cruising down to the South Atlantic aboard the Queen Elizabeth 2, to bonding with journalist Max Hastings, ("the first man into Stanley" thanks to riding pillion on Field's Scimitar) over cigars and Laphroaig while shells rain down around them. This is compelling stuff.

I have just finished reading a delightful and surprisingly insightful text, provided to me in the form of an ARC by its publishers, Pen and Sword, entitled "Scimitar Into Stanley: One Soldier's Falklands War" by Roger Field. The author was a young officer in the British expeditionary force sent to repel the Argentinian invaders in the Falklands
War. The book is based largely on the author's notes, taken during his service in the war. As this genre of literature goes, and largely because of the author's insights into the context of this war and his role in it, examined both contemporaneously through his "diary" and through his long life since then, it is a remarkably candid and well informed look at his experiences and how they fit into a specific time and place as well as what he has made of them since that time. The key here is both the importance of this conflict to the United Kingdom and the sardonic and often enormously amusing point of view of the young officer and the man he has become. I found his elucidation of British military traditions in the deep shadows of a lost empire both funny and often poignant. Further, while the text is no traditional military history of the Falklands campaign, and if that is what you are looking for this is not the place to start, it is, nonetheless, enormously and rather startlingly enlightening in its discussion of one mans experience of a very unique military campaign. Although Field goes to some lengths not to make too much of his own role in this bit of history as theater, it is worth keeping in mind that his role in these events and contribution to the British victory is significant indeed. He was very well placed in events on the ground to chronicle the efforts of the various components of the British military as a kind of inside observer of their struggle, and this, as much as anything else, gives the text its uniquely prescient importance as an historical document. It is a quick read, and one very situated in the late twentieth century, but the author's humanity shines through on every page, and it truly is a delight.

A well done account of the war in the Falklands. It was interesting to read of the events that occurred. The story was well told and held my attention. A definite must read for those who enjoy this type of story.

Roger Field was commissioned into The Blues and Royals in 1974 and served for 10 years. He saw action in the Falklands War – the subject of this memoir. Advised that, to reach high command, he must take life more seriously, he did just that and resigned to qualify as a lawyer working in the newspaper, TV, magazine and book publishing industries. He currently specialises in media law at New Media Law LLP. For the past 30 years he has written for national newspapers and magazines, including The Times, the Daily and Sunday Telegraph, Country Life, Apollo Magazine and a monthly antiques column for The Field. He co-wrote Rogue Male: Sabotage and Seduction Behind German Lines with Geoffrey Gordon-Creed DSO, MC and is the ‘secret’ co-writer of a Sunday Times military bestseller. He runs his own literary agency.