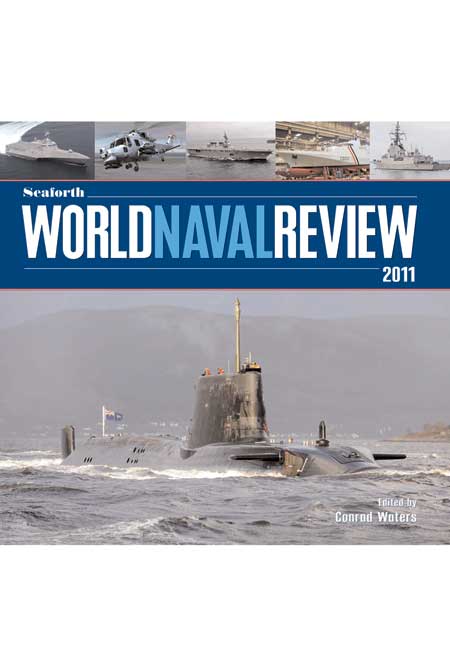 Click here for help on how to download our eBooks
Add to Basket
Add to Wishlist
You'll be £10.00 closer to your next £10.00 credit when you purchase Seaforth World Naval Review 2011. What's this?
Need a currency converter? Check XE.com for live rates

Launched in 2009, this annual is rapidly establishing a reputation as an authoritative but affordable summary of all that has happened in the naval world in the previous twelve months. It combines the standing features of regional surveys with one-off major articles on noteworthy new ships and other important developments. Besides the latest warship projects, it also looks at wider issues of importance to navies, such as aviation and electronics, and calls on expertise from around the globe to give a balanced picture of what is going on and to interpret its significance.

Intended to make interesting reading as well as providing authoritative reference, there is a strong visual emphasis, including specially commissioned drawings and the most recently released photographs and artists' impressions.
For anyone with an interest in contemporary naval affairs, whether an enthusiast or a defence professional, this annual is set to become required reading.

No one who is seriously interested in naval matters for business of pleasure can afford not to own a copy of this book.

This is an excellent book which is highly recommended for all those wishing to keep abreast of the world's naval developments.

Overall this superb publication is a must for all those interested in anything naval at home or abroad. The book i well put together, easy to read with brilliant sharp photographs. Overall, it is excellent and recommended.

Interesting reading as well as providing authoritative reference, the book has a strong visual emphasis, including specially commissioned drawings and the most recently released photographs and artists impressions of various warships. For anyone with an interest in contemporary naval affairs, be they an enthusiast or defence professional, this well-produced annual is set to become required reading. (Book of the Month)

Seaforth's World Naval Review 2011 is the ideal companion piece to the classic Jane's Fighting Ship. This book expresses a vast quality of extremely detailed information. It has a executive style overview and last years addition was was selected as the book of the year by Warships International Fleet Review. This Seaforth review is written by an impressive group of contributors. The book is beautifully laid out to Seaforth's traditionally high standard. It has many data tables and clear summary boxes, and is superbly illustrated throughout. An excellent book which is a must have, highly recommended.