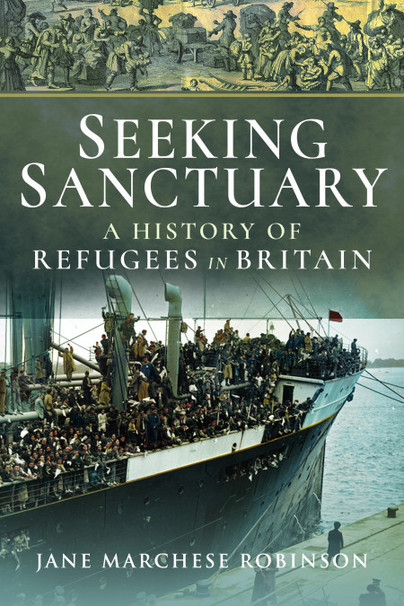 A History of Refugees in Britain

Add to Basket
Add to Wishlist
You'll be £14.99 closer to your next £10.00 credit when you purchase Seeking Sanctuary. What's this?
+£4.50 UK Delivery or free UK delivery if order is over £35
(click here for international delivery rates)

“Seeking Sanctuary” explores the history of people looking for refuge in this country. It starts with those protestant refugees fleeing oppression and persecution from Catholic Spain who ruled the Netherlands in the 16th century. It traces successive waves of peoples in the context of why they fled. At various times this was due to religious persecution, political upheaval, war and ethnic cleansing.

The author undertook this project after finding out that her grandmother was one of the 250,000 Belgian refugees who came to Britain in 1914 as they fled the invading German army. She explains the meaning of the word ‘refugee’ and how its legal definition arrived following the United Nations Declaration of Human Rights in 1948.

This history of people seeking refuge in Britain starts with the Protestants fleeing oppression and persecution from their Netherlands home by Catholic Spain in the 16th century. The book proceeds with tracing the successive waves of people in the various contexts of why they fled. These movements of people were usually due to religious pressures, political upheavals, wars and ethnic cleansing as we now call it.

The book reveal the stories of these people, the individuals and organisations involved in helping them , how they travelled and how they were received and treated on arrival in Britain. Of the 17 main chapters in the book, 11 relate to the 20th and 21st centuries which shows that ‘man’s inhumanity to man’ has not been eradicated by major wars.

This is a wide-ranging book which explores these major refugee movements in depth and it is often emotional in its details. There are extensive source notes for each chapter and a bibliography for further reading and research.

The author writes from the perspective of her work with asylum seekers, which evidently generated her interest in Britain’s history as a refuge. Jane Marchese Robinson’s passion for displaced persons is apparent in her examples and case studies, and for anyone with an interest in, or connection with, the selected groups of refugees over the past 100 years, it will make interesting reading. ...

... The author demonstrates compassion for, and empathy with, the groups she examines, and many will find this the compelling aspect of the book.

Association of Genealogists and Researchers in Archives

This is a wonderful read and delivers salient facts seamlessly interspersed with fascinating stories that give the reader an insight into the lives of those seeking safety in Britain over the centuries.

From the first Protestant refugees fleeing religious persecution to the recent Syrian crisis there is a wealth of information on why they took enormous risks to gain sanctuary and an insight into how these ‘Strangers’ were received at different stages.

I have often walked past the French church in Soho always meaning to read up on its history and never have but here I learned how Soho in the west end of London became home to hairdressers, jewellers, silversmiths and wigmakers while the east end was where the refugees developed the weaving industry.
We are all familiar with recent stories of people risking their lives in overloaded boats to reach our shores. Although a resident of Plymouth I had never heard of the 3000 Portuguese refugees came to Plymouth in 1828. They fled their home country in overloaded boats due to an ongoing war between Pedro and Miguel who were vying for the throne after their father’s death. While they were in Plymouth, they constructed a stage at the barracks and put on a play and another that was staged at the Royal Hotel and theatre. It was equally fascinating to learn that the author’s children found a Portuguese coin dating back to this time while playing in Devonport close to where the Portuguese were living at that time.

I had no idea that Norwich City Football Club gained its nickname The Canaries from the legacy of the ‘Strangers’ who came to live there and were well known for breeding these melodic birds.

This is an entrancing read, illuminating how life in Britain has been influenced and enhanced by those who arrived, often with nothing except their skills. Our lives have been made richer by the weavers, chandelier makers, and wig makers of Soho to name a few. I read this book in one sitting and wholeheartedly recommend it to you.

Babs Horton, author of A Jarful of Angels and Recipes for Cherubs