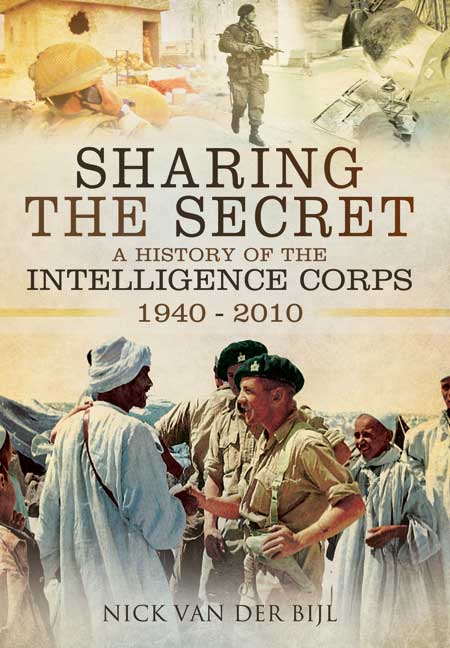 Click here for help on how to download our eBooks
Add to Basket
Add to Wishlist
You'll be £4.99 closer to your next £10.00 credit when you purchase Sharing the Secret. What's this?
Need a currency converter? Check XE.com for live rates

While written under the auspices of the Trustees of the Military Intelligence Museum, Sharing the Secret is not an academic regimental history. Rather it gives a privileged glimpse into a necessarily publicity-shy organization that has been deeply involved in military intelligence operations since its inception in 1940 through to 2010. Understandably, little has been written about the Corps' work for Official Secret reasons.

The development of Field Security and Protective Security and measures taken to protect the Army for espionage, sabotage, subversion and terrorism in peace and war are examined. These tasks were particularly important during the de-Nazification of Germany during the aftermath of the Second World War. Field Security led to the successful arrest of leading Nazis, including Himmler and Doenitz.

The author, who served in the Corps for over 20 years and saw active service in Northern Ireland and the Falklands, gives fascinating examples of differing Intelligence techniques in action. These include the exploitation of Imagery Interpretation, Human Intelligence, including the interrogation of prisoners of war, the examination of enemy documents and the deployment of Signals Intelligence so that commanders have enough information to fight the battles. The support the Intelligence Corps gave to the Special Operations Executive during the Second World War is well covered, as are examples of Special Duties since 1945.

The reader will appreciate that, as with any work relating to national intelligence and security, Sharing the Secret has been written under the restrictions of the era. That said, it provides a long-overdue insight into the contribution of members of the Intelligence Corps over seventy years of war and peace.

As featured in Burnham & Highbridge News


'Sharing the Secret' deserves to be read as a fascinating glimpse into the Corps since it got its wings, so to speak, 74 years ago this July.

If you're seeking to obtain a glimpse into this highly secret organization, then this volume is an ideal place to start. The author has produced an outstanding work and he should be highly commended for it.

There are not many books written about the British Military Intelligence services; plenty about M15 and M16 but the military intelligence services have kept themselves under the radar. This book sets out to tell something of their work. Although it was written with the aid of the Military Intelligence Museum, and by someone who actually served in the Corps; it is not an academic regimental history. It does bring to life the history and ethos of the organisation; and the people behind it. The British Military Intelligence Corps was set up in the dark days of 1940, and still exists. Much of the book focuses on the activities of the Corps during World War Two - which is to be expected. Famous initiatives designed to confuse the Axis powers are charted, along with sabotage and subversion followed by the way field security led to the arrest of prominent Nazis like Himmler and Doenitz. The final seven chapters of the book deal with all that has happened since then with sections on the Falklands and Northern Ireland, and other conflicts. For a military historian, it is essential reading. The book has been extremely well researched, and the information provided is backed up by reference to specific events and documents. A useful book which will be valued by researchers, historians and anyone with an interest in the intelligence services. 4 stars

In his foreword, author Nick van der Bijl remarks that the title Sharing the Secret has been taken from the Intelligence Corps Museum, but since it was written under the restrictions of the era some readers will be disappointed. Sadly this reviewer is one of them. Again as stated in the foreword the book is designed to complement two previous published histories of the Corps. Having read neither of these I was perhaps at a disadvantage from the outset, as others may be too.

So since it isn’t sharing secrets, what’s the book about? It is a history of the Intelligence Corps from its formative years in the 1940s to 2010. Given that the Corps was ever present in every theatre and every conflict during the period, condensing the book into a 340 page narrative is some achievement. And it’s perhaps the sheer scale of the Corps’ operations that left me feeling dis-satisfied. Covering such wide ground has left the author unable, or unwilling, to dig very deep anywhere.

Aside from a general opening chapter to explain the formation of the Corps, WW2 is dealt with a theatre at a time, from the Middle East, Central Mediterranean, Far East, North West Europe and Occupation, with further chapters devoted to the Special Operations Executive and Great Britain. Subsequent chapters take us through the years a decade at a time, with sub-sections on each theatre. Thus Northern Ireland appears every decade between the 1960s and 2010. The book is crammed with organisational facts and figures and seemingly endless organization and reorganization. This will delight serving and former members as they seek out familiar names – and there are plenty of them, and it’s not limited to officers. But details of what they did – and how they did it – are frustratingly shallow in many respects.

The book lives up to the title “A History of the Intelligence Corps” and will be required reading for any serious Intelligence student. But for the keen historian or even the lay reader, I’m not sure that the book will provide all the answers they seek.