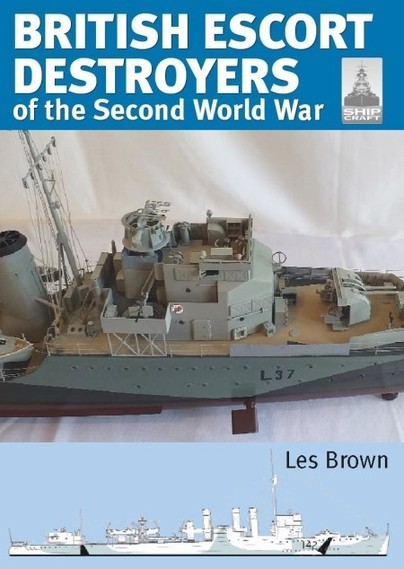 of the Second World War

Click here for help on how to download our eBooks
Add to Basket
Add to Wishlist
You'll be £7.98 closer to your next £10.00 credit when you purchase Shipcraft 28: British Escort Destroyers. What's this?
Need a currency converter? Check XE.com for live rates

This volume covers the many variations of Royal Navy wartime escort destroyers, both the purpose-built ‘Hunt’ class and the conversions from older fleet destroyers. The ‘Hunts’ were built in four groups (Types I to IV), while the old ‘V&W’ classes were modified to Long Range Escort, Short Range Escort and ‘Wair’ (anti-aircraft) variants. Also included are the fifty ex-US ‘flush-deckers’ that became the ‘Town’ class.

The final section of the book is made up of details of known modifications carried out to the ships throughout their lives and a few pages of basic, but helpful, plans of the ships. I think 4.5 anchors are in order for this book. To be fair, it might interest a few who aren’t modellers.

"I thoroughly recommend it to a wide range of readers."

Overall this is another excellent addition to the ShipCraft series. I enjoy building the occasional model warship and have a few destroyers. Not only did I find plenty of inspiration in here but a number of model producers that I wasn't aware of before. There is also a bibliography at the back, which provides plenty of good reference books, along with a list of useful website. Another very nice addition to the series.

This is the first book in the ShipCraft series from Seaforth Publishing that I have read. Wow, I have really enjoyed reading and reviewing this book looking at British Escort Destroyers in the Second World War.

Following on from his Shipcraft 27, Sloops and Frigates, Les Brown has taken on another wide ranging set of ships, the Hunts, Towns, V&Ws and a number of the smaller group of old destroyers that were adapted for escort work.

In just 18 pages he has managed to give a good overview of the design and construction of the ships. Later in the book he covers the subsequent modifications. The text is backed up by excellent and carefully selected photographs.

The range of models and accessories available covers the old out of product ion versions, along with modern 21st century models kits, including 3D printed and card formats.

As usual the real inspiration lies in the wonderful gallery of built models in various scales, the detailed line drawings, colour schemes and superb photographs. Many of the photographs have not been published before and they have been carefully chosen to illustrate the text.