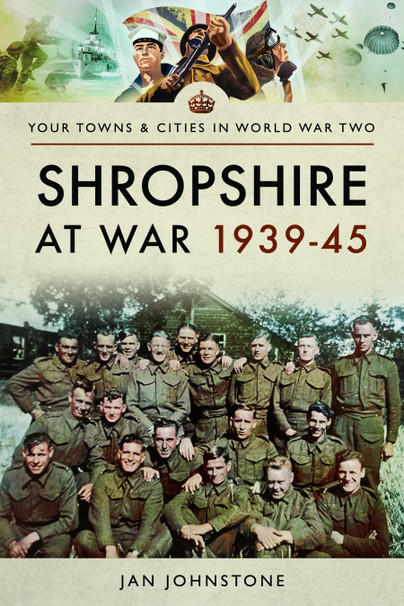 Click here for help on how to download our eBooks
Add to Basket
Add to Wishlist
You'll be £4.99 closer to your next £10.00 credit when you purchase Shropshire at War 1939–45. What's this?
Need a currency converter? Check XE.com for live rates

With the outbreak of the Second World War, Shropshire authorities immediately implemented pre-arranged plans to cope with the approaching conflict on the Home Front, including the building of air raid shelters and pillboxes and the renovation of redundant camps and disused airfields.

Men not eligible for the services volunteered for the LDV (later the Home Guard), the AFS and the ARP. Women were recruited for a variety of other posts, with members of the WVS dealing with a massive influx of evacuees from Merseyside and Smethwick right from the start.

Shropshire’s factories turned to armament production, coal mines increased their output and farmers cultivated more acreage (an extra 47,000 acres ploughed for food production in the first year of the war).

PoW Camps sprang up, with prisoners frequently seen being transported to work on local farms, while uniformed servicemen and women from Britain, the Commonwealth and America became familiar sights on the streets.

Using a variety of sources, including newspapers and verbal testimonies, the author paints a picture of the effect that six years of war had on those Salopians who, when others marched away, remained on the Home Front. Their struggles, acceptance of shortages, hardships and determination not to give in are reflected throughout this book.