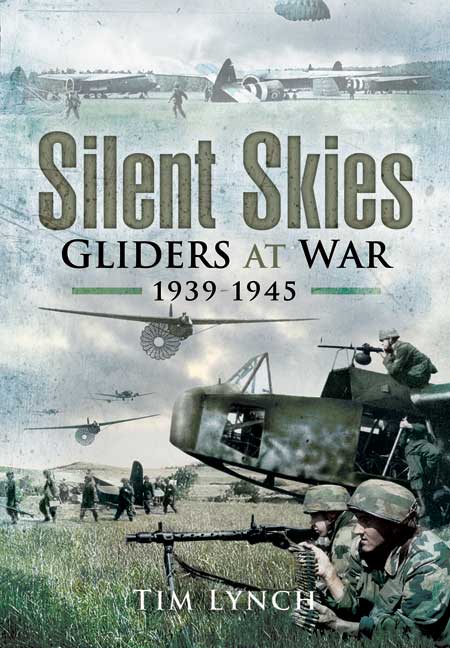 Click here for help on how to download our eBooks
Add to Basket
Add to Wishlist
You'll be £4.99 closer to your next £10.00 credit when you purchase Silent Skies. What's this?
Need a currency converter? Check XE.com for live rates

On 10 May 1940 warfare changed forever when gliders swooped down to seize the fortress of Eben Emael in Belgium ahead of the German advance. In the following five years of war, the glider evolved into a war-winning weapon capable of landing men, guns and even tanks with pinpoint precision. Across the world it became a vital element in military planning, yet no full history of glider operations has been written. Tim Lynch, in this graphic and highly readable study, gives vivid accounts of glider operations - some famous, some less well known - in every theatre of the war, in northern Europe, the Mediterranean, the Far East and the Pacific. He quotes extensively from the memoirs and eyewitness accounts of the glider pilots and the troops they carried, and he traces the evolution glider tactics over the course of the war.

The military glider was a short-lived innovation rendered obsolete by technological advances in the post-war period, yet it was used extensively by both sides throughout the Second World War, typically landing large numbers of infantry, artillery and even light tanks behind enemy lines, but it was also used to carry out small-scale precision raids, resupply operations, and the Germans even pioneered the now commonplace rapid airlift of troops and heavy equipment by developing an immense glider capable of carrying hundreds of passengers. This book summarises most glider operations of the war, amongst which are famous actions such as Eben Emael, Crete, Pegasus Bridge and Arnhem, but also a great many others which are rarely discussed, including Germany's daring rescue of Mussolini, their raid on Tito's Yugoslavian headquarters, British operations to support the Chindits in Burma, and the little known airborne operations carried out on both sides of the Eastern Front. Using first hand accounts of those involved, this is a fascinating story which puts the entire glider experiment into context, exploring its origins, development and increasing ambition as the war progressed.

The author clearly understands flying and the technicalities of handling an aircraft with no engines. The chapters on UK glider forces were as you would expect, well written and comprehensive.