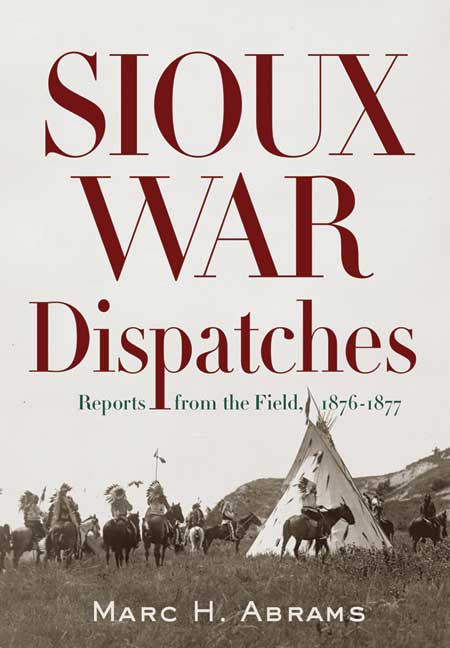 Add to Basket
Add to Wishlist
You'll be £17.50 closer to your next £10.00 credit when you purchase Sioux War Dispatches. What's this?
+£4.50 UK Delivery or free UK delivery if order is over £35
(click here for international delivery rates)

“No one commands better the story of the Great Sioux War of 1876–1877 as presented in the nation’s newspapers than does Marc Abrams. Here is Abrams’s story of America’s greatest Indian war woven from those timely reports, augmented with insightful introductions and annotations. Abrams has produced a significant addition to the historiography of this endlessly fascinating struggle and its colorful personalities.” —Paul L. Hedren, author of After Custer: Loss and Transformation in Sioux Country

“Marc Abrams has provided an invaluable service to both scholars and lay readers in compiling this treasure trove of primary information. Like the correspondents he has come to know through his research, Marc has done the hard work; we need only read in comfort and benefit from his efforts.” —Douglas W. Ellison, author of Sole Survivor: An Examination of the Frank Finkel Narrative

“Marc Abrams’s book is an exciting and innovative approach that brings immediacy to the campaigns of Custer, Crook, and Miles, and teems with fascinating new detail. Sioux War Dispatches not only offers a gripping contemporary window into those times, it fills an important reference need as well.” —Jerome A. Greene, author of Stricken Field: The Little Bighorn Since 1876

Sioux War Dispatches: Reports from the Field, 1876-1877, tells the story of the Great Sioux War, including the battle of the Little Big Horn, primarily through the eyes of contemporary newspaper correspondents, both civilian and military. The volume begins with the Black Hills dilemma and the issue of the unceded territory (the disputed lands that were adjacent to the Great Sioux Reservation) and continues through to the spring of 1877 with the surrender of the legendary Sioux leader Crazy Horse. Along the way readers will learn about the Reynolds battle, the skirmish at Tongue River Heights, the battle of the Rosebud, the battle of the Little Big Horn, the skirmish at Warbonnet Creek, the fight at Slim Buttes, and more. In addition to numerous annotated excerpts from those who were there, are rare original dispatches, reprinted in full, that will take readers on a wild ride through several battles.