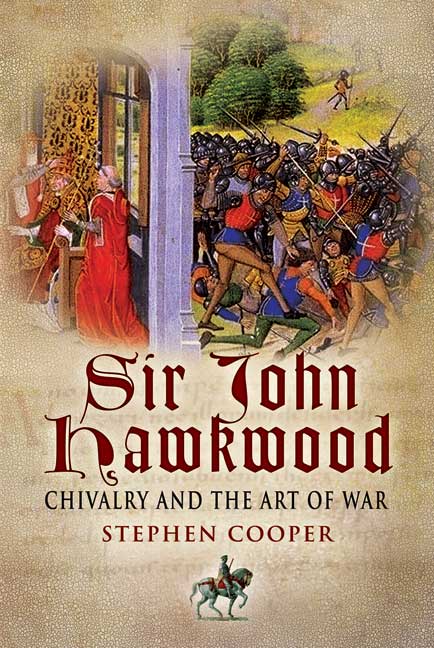 Chivalry & the Art of War

Click here for help on how to download our eBooks
Add to Basket
Add to Wishlist
You'll be £4.99 closer to your next £10.00 credit when you purchase Sir John Hawkwood. What's this?
Need a currency converter? Check XE.com for live rates

In Florence cathedral hangs a remarkable portrait by Uccello of Sir John Hawkwood, the English soldier of fortune who commanded the Florentine army at the age of 70 and earned a formidable reputation as one of the foremost mercenaries of the late middle ages. His life is an amazing story. He rose from modest beginnings in an Essex village, fought through the French campaigns of Edward III, went to Italy when he was 40 and played a leading role in ceaseless strife of the city-states that dominated that country. His success over so many years in such a brutal and uncertain age was founded on his exceptional skill as a soldier and commander, and it is this side of his career that Stephen Cooper explores in this perceptive and highly readable study.

I really enjoyed this book, and I think that it is the perfect gateway for anyone interested in reading about warfare in medieval Italy. Using a well-known character to describe one aspect of a period is a common gimmick of historians, which the author uses very well. I particularly appreciated the closing chapter that deals with the reputation of Hawkwood in previous publications and 'rehabilitates' his character. That being said, any reader who is already familiar with the political and military specifics of fourteen century Italy will not learn much from this book. It does not cover things that have not been previously dealt with, nor does it offer a brand new approach to its subject. However, it is a labour of love for a period, a country, and an emblematic, larger-than-life character; and, though done with talent, it has its limits as a scholarly study. Nevertheless, this is a book that I would warmly recommend to anyone who is interested in John Hawkwood's military career of warfare in medieval Italy.

The story of Sir John Hawkwood is one that is not to be missed, he is the great leader who guided and commanded the Florentine army while he was at the old age of seventy, and during 1300's this would have been a rare age to reach, in fact much years later around the Tudor's reign, this was still a hard age to reach, so you can guarantee that this book will have many exciting adventures and amazing battles like his apprenticeship in the military forces during The Hundred Years War. To command an army to a victory at the age of 70 is an achievement in itself, but to have also commanded a foreign army, does show how great he was and how highly respected he was across Europe, he had a well earned reputation as one of the greatest mercenaries of the late middle ages. There is no doubt that Sir John's career will be an extremely fascinating one, not just because of his old age and lengthy career, but that he has fought across many different countries in Europe such as Italy and France, with many different men and soldiers, and always managing to command his tactics and plots to try and make them successful and by doing this, giving himself this famous career.

The Story starts at the beginning of Sir John's life which is believed to be around 1320, it starts with a article from Jean Froissart, who was present in the late middle ages, so it gives some good insight to Sir John's early life, however as Stephen Cooper writes there is not much information on him, to have a full biography of him. The book goes through his military career starting where he signed up on an apprenticeship during the Hundred Years War, all the way to his battles in France and Italy. This book shows his character and how he behaved and what his aims were, an also who his loyalty were to, like the Papacy. It shows the relationship he had with the Pope, he did not always obey him, because his objectives and aims were not realistic enough, but he still remained loyal as long as he was getting paid.

This book also has a section in the middle, which holds many pictures and drawings of places, monuments and coats of ams. It shows fantastic images of castles and buildings, so that you can really imagine the battleground that the fights and wars took place on, and it gives you an idea of the terrain and land that they had to adapt to and fight on, which would have been a greater challenge for the Englishman Sir John Hawkwood who is not fighting on his home land that he knows well. This book displays sources written by editors and letters that are written by other soldiers to give the reader an idea of the opinions of the other Soldiers and writers to see their thoughts on the battles and views of John Hawkwood. As well as this, Stephen Cooper also provides two chapters at the end of the book which give insight to the life on Hawkwood. One of these chapters is written by Hawkwood himself, they are two letters that were written in English and recovered. The other chapter contains a number of witticisms written by Francesco Sachetti.

This book would be a fantastic buy for anyone that is very fascinated in the Middle Ages, and England's contribution to the battles that were going on across Europe, because Sir John Hawkwood is a fantastic leader and had a great long career, so this book would definitely tick those boxes and would give the reader fantastic enjoyment and wonder with this book.

Some may regard the mercenary soldier as a modern phenomenon. However it is far from the truth as this detailed, informative and entertaining account surely attests to.
Sir John Hawkwood was indeed an English soldier of fortune who commanded the Florentine army at the ripe age of seventy (very ripe age by medieval standards). However Cooper's account traces Hawkwood's life right from his birth (circa 1320), through to his military apprenticeship in the Hundred Years' War, unnaturally, some might say, leading to the experiences surrounding the bitter politics and the vicious personal rivalries common in late medieval Italy. I suspect that even seasoned scholars of Medieval history will be able to learn something here.

The story of Sir John Hawkwood is one brimming with a lifetime of military experiences, following him from modest beginnings in an Essex village, through to his campaigning years, where he gained the reputation as being one of the most outstanding generals of his day. Stephan Cooper gives great insight into Hawkwood's life in a captivating recount of his long career, particularly revealing the politics and brutal personal rivalries of the late medieval Italy. Cooper perfectly examines the essential dark exploits in European warfare and would make excellent reading for an enthusiast of military history.

"I served in the RAF during the whole of World War II .... most of my combat experience was at the controls of a Hurricane or Spitfire and the thought of hand to hand fighting with swords, lances and knives, whether on foot or horseback fills me with horror. I would rather dodge bombs than arrows!

It is a very readable book .. the chapter headings and sub-headings are most helpful as was the index. The photos are excellent.

The story, Novella 181, about the visit of the two Franciscan friars meeting Sir John at Montecchio intrigued me...

I have just finished this book on G. Acuto which I really enjoyed. ....
Stephen sticks to Hawkwood as the central part of your narrative even where you are drawing on wider material to illustrate your argument.