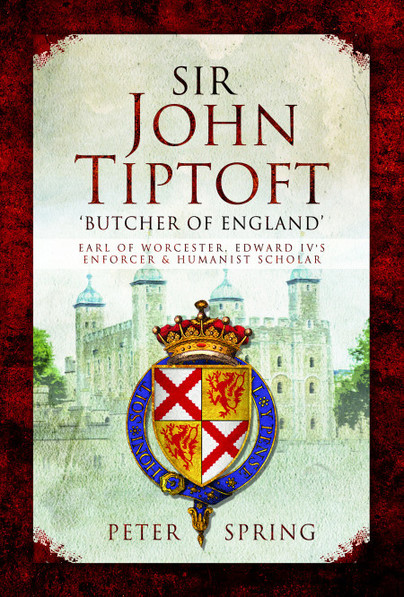 Click here for help on how to download our eBooks
Add to Basket
Add to Wishlist
You'll be £4.99 closer to your next £10.00 credit when you purchase Sir John Tiptoft – 'Butcher of England'. What's this?
Need a currency converter? Check XE.com for live rates

John Tiptoft, Earl of Worcester, is arguably the most intriguing, controversial and possibly misunderstood figure of the Wars of the Roses period. Politically adept, he occupied a string of important offices, first under the Lancastrian Henry VI and then the Yorkist Edward IV.

A man of action, he held commands on both and sea, in England, Ireland and Wales.

As Constable of England he acted as Edward’s enforcer and earned the sobriquet ‘Butcher of England’ for his beheadings and impalements. Yet he was also an outstanding Renaissance scholar who studied at Oxford, Padua and Ferrara, a collector of books and patron. This, in conjunction with his political actions, makes him a proto-Machiavellian Prince.

Peter Spring also looks beyond the Earl’s public life to glean insights into the man himself, concluding that the available information generally reveals an attractive personality. He presents a balanced reappraisal, seeing him, as did many contemporary Europeans and some fellow countrymen, as a man of great intellect and capability who did not shirk the hard tasks imposed by a merciless age.

Worcester’s execution for the application of Roman law, lampooned as the ‘laws of Padua’, demonstrated the danger of indentification with continental influences in an England increasingly defining itself—through common law, Parliament, and soon religion—against Europe. The contemporary denigration of his character by little Englander chroniclers reflected a deepening antipathy towards the cosmopolitan — a recurring trait in the English character — perhaps re-emerging with Brexit.


This is a magnificent, heavyweight but readable and well-presented biography of one of the leading but most neglected characters in the War of the Roses.
Spring takes us carefully through each stage of an action-packed life.

Any biographer of Tiptoft is fortunate in that long narrative accounts survive of important episode in his life. They are used to great effect in this book and make interesting reading for scholar and non-specialist alike.

Spring's telling of Tiptoft's tale is engaging, and its argument that the Butcher deserves reappraisal intriguing, if not wholly convincing.

You're really going to have to be a keen subscriber to the age to get through it. There is a nice mono, glossy plate section in the middle to show some of the locations being discussed and the appendices and bibliography will be useful for students.