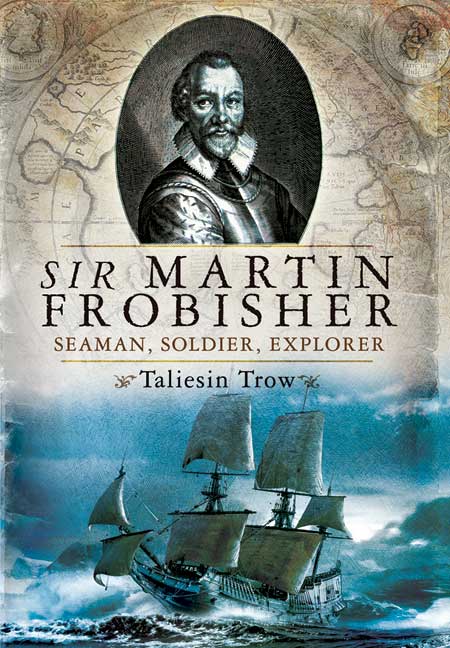 Click here for help on how to download our eBooks
Add to Basket
Add to Wishlist
You'll be £4.99 closer to your next £10.00 credit when you purchase Sir Martin Frobisher. What's this?
Need a currency converter? Check XE.com for live rates

Sir Martin Frobisher was one of the great sea dogs of Elizabethan England. He was a pirate and a privateer - he looted countless ships and was incarcerated by the Portuguese as a young man - and he aided Sir Francis Drake in one of his most daring voyages to attack the Spanish in the West Indies.
But Frobisher was also a warrior who was knighted for his services against the Spanish Armada, and he was an explorer. He was the first Englishman to attempt to find the fabled Northwest Passage to Cathay – to China. He commanded three voyages into the uncharted northern wastes Canada and Greenland and devoted eighteen years of his life to this dream.
Taliesin Trow’s new biographical study of this many-sided Elizabethan adventurer should revive interest in him and in this extraordinary period in English seafaring history. For Frobisher was a fascinating, enigmatic character whose reputation is often eclipsed by those of his remarkable contemporaries, Drake, Hawkins and Ralegh.

Taliesin Trow is a historian and archaeologist who has made a special study of the Inuit of Canada and the Northwest, and he has long been fascinated by the pioneering voyages of early European explorers like Frobisher into this inhospitable area of the New World. Previously he has co-authored books on Kit Marlowe and Boudicca.

Most people have heard of Queen Elizabeth I’s pirates, but few can readily name any unless his name is Sir Francis Drake. Trow remedies this oversight with his latest book, Sir Martin Frobisher, an English Sea Dog who searched for a Northwest Passage and gold to fill English coffers. He was impulsive, hot-headed, self-centered, and egotistical, but he was also an able seaman and an adventurer. At different times in his life he was a prisoner, an interpreter, a trader, a thief, a privateer, a pirate hunter, and a defender of the realm. He led three voyages to the New World, introduced the English to a new race of people, and was one of the few to venture into the icy waters of the North Atlantic to reach such places as Greenland and Baffin Bay as he searched for gold and Meta Incognita.

There is little documentary evidence to give us a good picture of Frobisher the man, but there are many historical references to him as a mariner and explorer, and it is from these that Trow crafts a succinct look into this man and the issues of importance during his lifetime. Doing so grounds the reader and provides a compelling overview of the period. By unveiling various facets of the man, the author allows the reader to discover that Frobisher is human, rather than just a stick figure who made his mark on history.

The journey through Frobisher’s life is enriched with black-and-white illustrations and maps, as well as a timeline of the man’s life and New World exploration. An appendix covers the ships he used. There are also chapter notes, a selected bibliography, and index.

The Elizabethan age is most popularly associated with the defeat of the Spanish Armada, the exploration and discoveries of the 'New World', and of course the all important importation into England of the potato. Sir Francis Drake, the defender of the English realm, Sir Walter Raleigh and his possible bipolar relationship with the Virgin Queen, and not to mention his important discovery of the potato, these are the popular names we hear of in this period, so it is a welcome change to discover a less familiar name in this great age of discovery. Taliesin Trow offers his readers a new chapter in Elizabethan history, the chronicled life and times of Sir Martin Frobisher; from his heroic acts battling alongside Sir Francis to his own voyages across the great Atlantic in pursuit of lands a plenty. Frobisher's life is not one accredited with immense notability or heroism, though he fought for country, his voyages of discovery were advanced by an Englishman's greed and not always a successful Englishman's greed, an example of his failed attempts would be his contribution to geology in the form of pyrite or 'fool's gold'. It is these exploits of a true human being instead of the glorious accounts of a 'God among men' that give this book its charm. Trow's factual accounts deliver an impressive insight into the life and motivation of this mediocre Sir, and not knowing how each of Frobisher's dreams are set to turn out make this a compelling read from cover to cover.