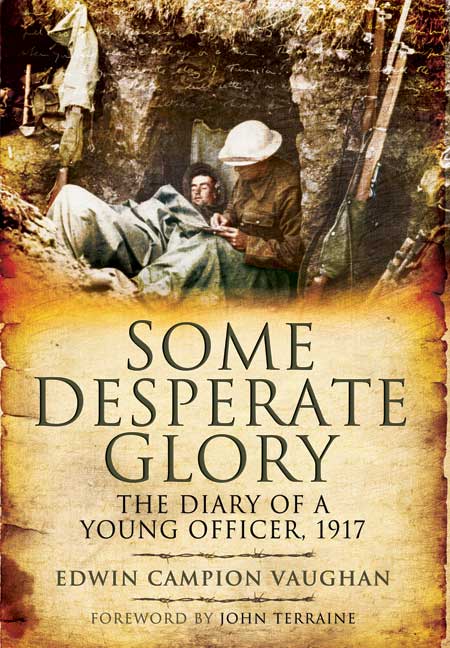 Click here for help on how to download our eBooks
Add to Basket
Add to Wishlist
You'll be £4.99 closer to your next £10.00 credit when you purchase Some Desperate Glory. What's this?
Need a currency converter? Check XE.com for live rates

'This diary of a few months in the life of a young officer on the Western Front in 1917 deserves to rank close behind Graves, Owen, Sassoon, among the most brilliant and harrowing documents of that devastating period.' Max Hastings

Some Desperate Glory charts the progress of an enthusiastic and patriotic young officer who marched into battle with Palgrave's Golden Treasury in his pack. Intensely honest and revealing, his diary evokes the day-to-day minutiae of trench warfare: its constant dangers and mind-numbing routine interspersed with lyrical and sometimes comic interludes. Vividly capturing the spirit of the officers and men at the front, the diary grows in horror and disillusionment as Vaughan's company is drawn into the carnage of Passchendaele from which, of his original 'happy little band' of 90 men, only 15 survived.

This true account of Edwin Campion Vaughan's time serving in the army in the First World War is a revelation. It contains all the moving insights you would expect to find from a Great War diary, the suffering and deprivation of the men fighting on the front and the growing disillusionment and death but it also contains a good deal you would not expect to find. Written entirely in the moment, it contains no sense of hindsight and no sense of an agenda and as such, it has genuine and authentic heart. It is purely one man's honest account of what happened, as it happened. So, to his surprise, Vaughan finds his first military action is not fighting Jerry on the front line, but chasing down a bunch of drunken AWOL Australians, running amok in the local town. We are also party to his attempts, in the early days at least, to keep true to his faith by finding the padre and attempting to attend mass. It is these small but telling details which make this diary so very special.

Some desperate glory is exactly that, one man's journey into the hell of a desperate and catastrophic War. The diary of Edwin Campion Vaughan begins on a train from Waterloo surrounded by happy excited faces and loving farewells from sweethearts, family and friends. In his own words he said,’ I felt a horrible aching at my heart,' and so do we, when we begin his harrowing journey through the carnage and helplessness he was to endure.
Edwin Stephen Campion Vaughan MC (1897-1931) served in the Royal Warwickshire regiment and kept his meticulous and brutally honest diary from his arrival at the trenches on the western front, where his first night was spent in freezing temperatures sleeping in his overcoat. His diary highlights the bitter everyday struggle just for food and shelter and the hardships of trench living. He describes washing and shaving with one mug of lukewarm water as sheer heaven in the filth and degradation of his makeshift billet. In the depths of despair and death he also describes the humour the men shared, deep comradeship and compassion even though they were living like animals under the freezing earth riddled by rats, lice and putrid mud literally everywhere. Vaughan’s company is tested to the very limits of endurance when they are thrown into the carnage of Passchendaele with only 15 out of 90 men surviving from his original "happy little band.'
The beauty of this book is that it is a true and historically correct account written by an officer in his own expressive language. We can really know him in a very personal way almost as if we are a bystander at every twist and turn of his existence at the front. It is a deeply moving account and everyone should read it young and old .The sacrifice these men made is unimaginable and is a testament to their bravery and Edwin's diary will be preserved for all time.

The author Edwin Campion Vaughan fought on the Western Front during the Great War, he kept a record of day to day experiences in the trenches during this time, this book is his account of life for a soldier during the war and the horrors and carnage that he and others experienced. He fought at Passchendaele during the Third Battle of Ypres, and in this carnage Vaughan's company or 'happy little band' as he called it were originally a company of ninety, only fifteen survived this ordeal. At first this diary is comical and captures the heart and spirit of the soldiers but gradually shows disillusionment and gives us a brutal and sensitive record of the lives and deaths of the trenches. Written day by day, month by month, Vaughan's book is a riveting read on what it was like for a soldier.

"Some Desperate Glory:The Diary of a Young Officer, 1917" is, as the title suggests, the diary of Edwin Campion Vaughan, who served as an officer in the Royal Warwickshire Regiment enduring the mud and filth and horror of the Western Front during World War I. When he was commissioned into the regiment in June 1916 he was still a teenager having celebrated his 18th birthday the previous November. A Captain by the end of the year he had already seen more war and death than any boy of his age ever should.

These diaries cover a period of just 8 months in 1917 from the beginning of January till the end of August. Originally published in 1981 and with a foreword by the writer John Terraine, an author of several works about the Great War, the diaries are honest and revealing and hold little back in their account not only of the brutally of war but also the drudgery and boredom, the stultifying routine, the craziness, the incompetence as well as some lighter moments when the forces of the main combatants could for a short moment forget where they were and laugh and enjoy and, perhaps, think of home. It also exposes the growing disillusionment of this young man as he and his comrades find themselves in the middle of the slaughter of Passchendaele. From a original company of 90 men only 15 survived. The book is, then, a very interesting and thought provoking account of one mans' experiences of just a few months in the first global conflict of the 20th century and will fascinate, appall and maybe render in the reader convictions of the utter futility and waste of war. If so it will perhaps have achieved what the author intended.

An officer's diary hidden away for 40 years reveals the horrors of World War One in harrowing detail.
Captain Edward Vaughan was 20 when he noted in his journal how 15 out of 90 troops survived the slaughter of 1917.
he described seeing on soldier " blown to atoms".

Edwin Vaughan served with The Royal Warwickshire Regiment during the Great War and this intensely personal account of his experiences illustrates that, despite the technological advances made to the intervening 82 years, at the human level at least, very little has changed.

The author describes the horror in graphic detail and admits his fear with a disarming candour. Yet between all ranks within his platoon there is a sense of purpose and a level of camaraderie that endures to this day. This is not a book for the strategist but an offering which deals with the reality of trench warfare at such an intimate level that one can almost smell the sandbags.

Edwin Vaughan had an highly eventful military career; serving in the Royal Warwickshire Regiment on the Western Front as well as in Italy during the Great War and subsequently being awarded the Military cross in 1918. This riveting wartime diary is quite simply one of the most revealing and harrowing documents born of that era. The honesty of his account vividly evokes the experience of the soldier embroiled in trench warfare - with a background of constant fear, interspersed with extended periods of unbearable tedium, building to the eventual horror and disillusionment as Vaughan's men fall victim to the carnage of Passchendaele. Most surprising, though, is the humour found to be punctuating the events, which somehow makes the horror all the more visceral and poignant. Though the book is highly emotional and graphic, it is absolutely gripping and very difficult to put down. It is certainly an eye-opener for any newcomers to the reality of the Great War, but its lyrical quality and historical value make it also essential to the seasoned reader.

This diary covers the period from January to August 1917, from its author's arrival in France for the first time to his participation in the Third Battle of Ypres in August of the same year. Edward Campion Vaughan was a very young and inexperienced officer at the start of this period, and was quite willing to admit that in his diary.

Perhaps the most outstanding feature of this diary is the sudden shift in mood towards the end. Until then life on the front line has been uncomfortable and often dangerously, but not deadly. As we approach the end of the period covered this begins to change, as Vaughan is swept up in the Third Battle of Ypres, and the end is achingly sad, as the author and his unit become involved in one of the most disastrous attacks in this notoriously disastrous battle.

This change in the nature of Vaughan's service means that we get to see two different aspects of life in the trenches, and can compare the mood in the comparatively quiet times, where the weather and living conditions seem to be the biggest threat, with that during major battles. We also get to know the men in his company, making their eventual fate all the more dreadful.

Vaughan also pays an unusual amount of attention to the men under his command, giving us a really good idea of the relationship between the junior officers and their men, something that is often missing in Great War diaries. Overall this is one of the more interesting books of its type.

This is another reprint of a Great War 'classic' by Pen & Sword. Among my favorite memoirs of the war, this version also includes an introduction by the late military historian John Terraine. Well, not really a memoir as it was posthumously published from the author's diary.

The author served with the 1/8th Battalion of the Royal Warwickshire Regiment and this work covers eight months of their war in 1917, beginning with the cautious pursuit of the enemy withdrawal to the Hindenburg Line and going on to the searing experience of the Battle of Langemarck in August. Beautifully written and memorable, it deservedly became a classic when it was originally published in 1981, fifty years after the authors death. One of the "must reads" but particularly if you are interested in the Warwicks, the South Midland Division or Langemarck.

An absolute must-have book for all readers!
This diary from a young officer who served with the Royal Warwickshire Regiment in the Western Front provides a vivid and very personal account over eight months in 1917.
This is one of the finest diaries I have come across in the last ten years and I heartily recommend it to all.