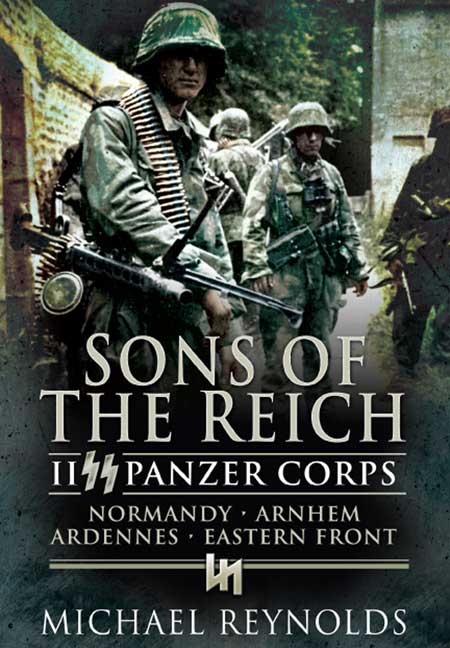 Sons of the Reich (Paperback)

Add to Basket
Add to Wishlist
You'll be £18.99 closer to your next £10.00 credit when you purchase Sons of the Reich. What's this?
+£4.50 UK Delivery or free UK delivery if order is over £35
(click here for international delivery rates)

The history of II SS Panzer Corps is a short and violent one. This meticulously researched book documents the actions of the 9th and 10th SS Panzer Divisions from activation until October 1944, and the 2nd and 9th SS Divisions from December 1944 until the end of the war.

This period encompasses the Battle of Normandy, the escape from the Falaise Pocket, the Market Garden episode and Hitler's last great offensive in the West, the Battle of the Bulge. Sons of the Reich also dismantles the myth that the Waffen SS were a volunteer force of brainwashed thugs and fanatics, in fact II SS Panzer Division were ordinary conscripts, whose tenacity (most noteably at Arnhem in September 1944) was admired by friend and foe alike.

The German side to this story has rarely been probed in any great detail despite the vast library which has been published about the battle, so this book is a welcome addition for that reason alone, but still more so as it has been very well researched and provides a thorough account of the Corps' movements and actions throughout, interspersed with a number of first hand accounts.