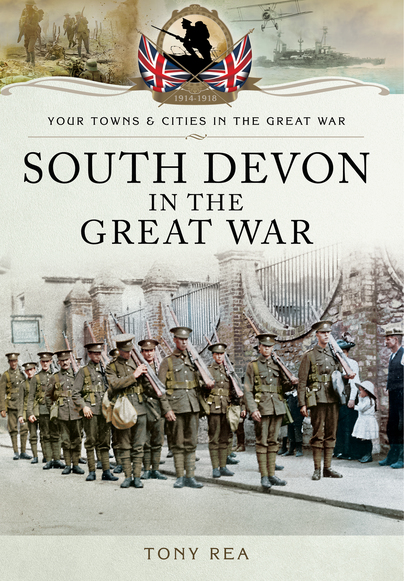 Click here for help on how to download our eBooks
Add to Basket
Add to Wishlist
You'll be £4.99 closer to your next £10.00 credit when you purchase South Devon in the Great War. What's this?
Need a currency converter? Check XE.com for live rates

South Devon in the Great War provides the first definitive history of events in this part of Devon during the First World War, with more than fifty pictures, some unpublished for 100 years. The author's succinct and engaging text is further enhanced by a unique set of then and now photographs, and provides readers with an incomparable pictorial overview of events on the Home Front

To the casual observer, south Devon may have seemed an agricultural backwater of Britain during the war, important in but two respects; the Britannia Royal Naval College at Dartmouth and the Royal Naval base at Devonport. However, a closer and more considered gaze reveals significant changes.

By late 1915 many of the young men and, significantly, almost all of the horses had gone away to war. Older men and many women now farmed the land, aided by German PoWs. Dartmoor Gaol became home to hundreds of Conscientious Objectors put to work on the quarries whilst large and medium sized country houses were converted to hospitals and convalescent homes.

Not only does South Devon in the Great War detail these changes, it also explains how the local regiment responded to the call to arms of a whole nation. Within these pages the reader will find many personal tales of sacrifice, loss and grief. Most of all, however, readers will be ultimately uplifted by tales of the endurance of the human spirit.

South Devon's involvement in the Great War is examined in terrific detail by Tony Rea - once again a magnificent collection of photographs and some surprising revelations. Fascinating.

Dr Tony Rea has long-standing interests in the First World War and local history. He moved from the position of Head of History at Kingsbridge School, south Devon, to Oxford in order to embark upon a career in higher education and has since taught in universities in the UK, The Gambia, Saudi Arabia and Sweden. Tony no longer teaches, but writes professionally. He has recently written his first novel, also set in south Devon during the Great War.