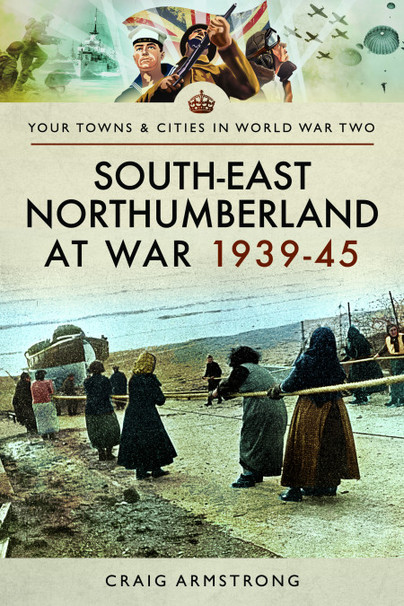 Click here for help on how to download our eBooks
Add to Basket
Add to Wishlist
You'll be £4.99 closer to your next £10.00 credit when you purchase South East Northumberland at War 1939–45. What's this?
Need a currency converter? Check XE.com for live rates

In 1939, South-East Northumberland shared a proud tradition of military service with it’s wider region and this was reflected in the huge numbers of men and women from the area who came forward for service in the military or in roles such as the Home Guard, ARP services or nursing. This part of Northumberland was a key recruitment centre for the local county regiment, the Royal Northumberland Fusiliers, with men from the area being heavily involved in the fighting during the blitzkrieg of France and the Low Countries, the miracle of Dunkirk, as well as many more battles. Yet, to the dismay of many, an entire territorial battalion was taken prisoner at Singapore. &#8232;&#8232;

The district was also vital as both an industrial and farming centre with a nationally significant mining industry, light and heavy industry and shipbuilding nestling alongside large tracts of farming land. The area’s coastline was a key battleground throughout the war with the Nazis making determined attacks on the vital shipping lanes which ran up the coast from London to Scotland. The port town of Blyth thus played a substantial role in maintaining the supply lines of the British Isles and was also home to a large submarine base and training centre. &#8232;&#8232;

Many communities in the area welcomed evacuees from urban Tyneside whilst others were themselves evacuated. Others saw the business opportunities created by the war and this book highlights this and also includes accounts of the struggle that many families faced in coping with rising wartime prices, longer working hours and endless worry. Despite the hardships the people of South-East Northumberland faced, morale was maintained and the community continued to provide incredible charitable support right up until the end of the war in addition to their normal efforts.

Others, unfortunately, saw the war as a chance to improve their financial prospects and the book also uncovers several scandals and subsequent trials which showed a sometimes darker side to the home front.&#8232;&#8232; South-East Northumberland at War 1939-1945 poignantly commemorates the efforts and achievements of Northumberland's south-eastern communities: farmers, fighters, families divided, all surviving astounding challenges.

Armstrong is a very old Northumberland name, associated with the notorious family of Border Reivers and also with the great industrialist and engineer, Sir William.

His namesake has done a fine job of social and military history in this enjoyable book, which is an invaluable account of a tight community in a small part of Northumberland, in WW2.

This particular book comes across as a very intimate read about the area, it deals with the course of the ward, what went on the building up of the services as the war went on, the local people and how the community worked together and adapted to circumstances. Having been to the area it is a very rural and coastal place with lots of small towns and cities surrounded by countryside. Reading this book and recognising most of the places it was a great read. Also for a small book, I hadn't expected it to be packed with so much text and the pictures/charts are great too, very informative. A book that I hope does well and should sell well in that particular area.

The ‘Your Towns & Cities In World War Two’ is providing a unique catalogue of local histories specific to WWII and has become very popular. This new book is written by an author born and bred in the area and provides a completely absorbing account of how the people of South-East Northumberland responded to the realities of WWII – Very Highly Recommended.

The latest in Pen and Sword's brilliant "Your Towns and Cities in World War Two" continues with South East Northumberland. Essential and fascinating reading in both of these books for locals, students, social historians etc.