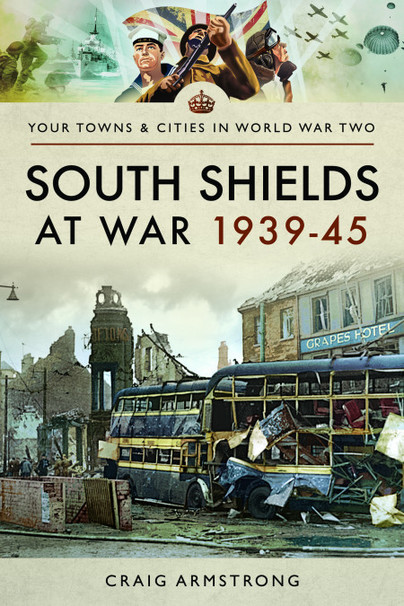 Click here for help on how to download our eBooks
Add to Basket
Add to Wishlist
You'll be £4.99 closer to your next £10.00 credit when you purchase South Shields at War 1939–45. What's this?
Need a currency converter? Check XE.com for live rates

South Shields and its near neighbours such as Jarrow were key communities in the national war effort, despite their relatively small size. Located on the East Coast, South Shields was situated at the key entry to the strategically important River Tyne and was well defended against enemy attack. The seaside town saw a large military build-up with several different army and naval units rotating through the area to man defences and to train whilst the local Home Guard unit defended vital installations such as shipyards and docks.

Huge numbers of South Shields men and women volunteered for wartime service, while many others worked in vital wartime industries. The town had a particularly high number of men serving in the Merchant Navy and the South Shields mariners suffered very heavy casualties. South Shields also had a multi-cultural population with a large number of foreign (or aliens as they were referred to) seamen and an especially large and active Yemeni community. Indeed, South Shields was to become then first town in Britain to have a purpose-built mosque. Although there were tensions amongst the population due to cultural and racial differences, but the Yemeni community played a considerable and loyal role in the war effort.

The area also hosted a large number of heavy and light industrial works; the shipyards made a significant contribution to the war effort, with vast amounts of coal transported from the docks of South Shields, especially Tyne Dock, while at Jarrow, there were determined, though largely unsuccessful, attempts to revive the famous Palmer’s Yard.

The book also looks at the considerable contribution made by the men and women who volunteered for the ARP and Civil Defence Services. The towns of Tyneside, including South Shields, were heavily attacked by the Luftwaffe and the blitzes of 1941 hit the town particularly hard. No member of the community was left untouched by the war, whether they were evacuees, workers, servicemen or just civilians struggling to maintain a home in wartime Britain. South Shields and its neighbouring communities made a considerable contribution to the war effort, one which deserves to be remembered.