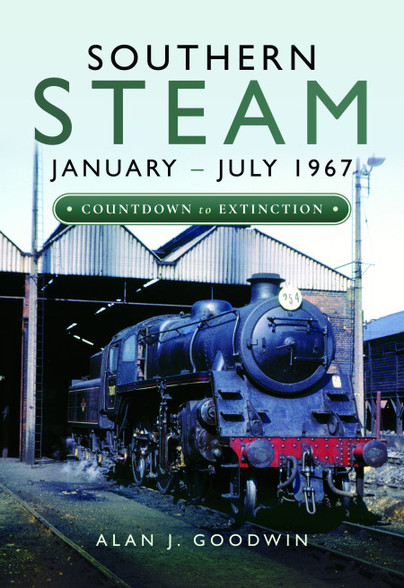 Click here for help on how to download our eBooks
Add to Basket
Add to Wishlist
You'll be £10.00 closer to your next £10.00 credit when you purchase Southern Steam: January – July 1967. What's this?
Need a currency converter? Check XE.com for live rates

At the beginning of 1967 the writing was clearly on the wall for Southern Steam, with the intention of eliminating it altogether on the 18th June of that year. From the 2nd January, with the Brush type 4s working many main line trains including the “Bournemouth Belle”, steam was reduced to thirteen departures from Waterloo, three of which were in the early hours.

From the 3rd April this was further reduced to just five day and three night time departures. However, by this time it was realised that due to late delivery of the new electric stock, the deadline for the demise of steam was put back to the 9th July and an interim timetable introduced from 12th June.

Using information gathered from many sources, “Southern Steam: January – July 1967” chronicles the events of 1967, with the final five weeks in detail, including events that formed the background to the time.

A remarkable and well researched book which should be on the shelves of all with an interest in Southern Steam in its final twenty-seven weeks in 1967.

Sad story of the demise of the steam railways in the south of Britain. Alan's account of how steam engines were withdrawn from service reads like a series of very sad obituaries. Very moving.

Article: 'Chronicling the countdown to the end of the age of steam as featured by

Article: 'Southern railwayman chronicles countdown to the end of steam' as featured by

Alan Goodwin is a retired railwayman living in East Sussex. He is a lifelong railway enthusiast, admits to using a Duffle bag in his train spotting days and still has a penchant for cheese and pickle sandwiches. He has never liked Tizer.