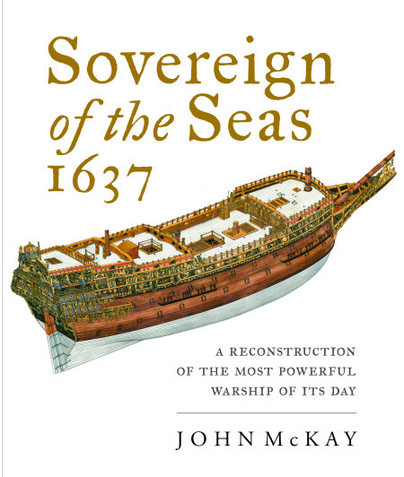 A Reconstruction of the Most Powerful Warship of its Day

Add to Basket
You'll be £32.00 closer to your next £10.00 credit when you purchase Sovereign of the Seas, 1637. What's this?
+£4 UK Delivery or free UK delivery if order is over £30
(click here for international delivery rates)

Sovereign of the Seas was the most spectacular, extravagant and controversial warship of the early seventeenth century. The ultimate royal prestige project, whose armament was increased by the King’s decree to the unheard-of figure of 100 guns, the ship finally cost the equivalent of ten more conventional warships. A significant proportion of this total was spent on her gilded decoration, which gave the ship a unique combination of firepower and visual impact in battle that led her Dutch opponents to dub her the ‘Golden Devil’. The vessel was the poster-child of the notorious ‘Ship Money’ tax, raised without parliamentary approval and so unpopular it was a major factor leading to the Civil War in which Charles I lost his sovereignty and his head. In that sense, she was a ship that cost a kingdom.

It is unsurprising that such a high-profile ship should be well-documented, but there are no contemporary plans and much of the visual evidence is contradictory. In this book, John McKay sets out to analyse the data and reconstruct the design and appearance of the ship in a degree of detail never previously attempted. The results are presented as a folio of superbly draughted plans, isometric drawings and coloured renderings, covering every aspect of the design from the hull form to the minutiae of sails and rigging. Each section is accompanied by an explanatory text, setting out the rationale for his conclusions, so the book will be of value to historians of the period as well as providing superb reference for any modeller tackling of one of the most popular of all sailing ship subjects.

John McKay is a professional draughtsman but also an authority on the design and construction of ships from the sailing era. He wrote and produced volumes in the ‘Anatomy of the Ship’ on the Victory and Bounty and also illustrated others on the frigate Pandora and the ‘Flower’ class corvette Agassiz.