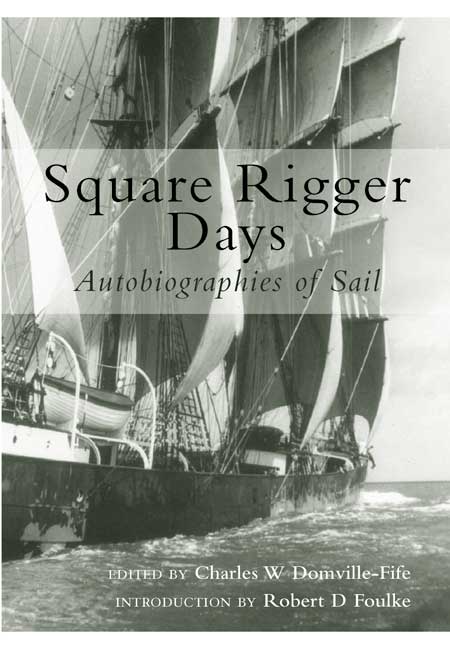 Click here for help on how to download our eBooks
Add to Basket
Add to Wishlist
You'll be £0.99 closer to your next £10.00 credit when you purchase Square Rigger Days. What's this?
Need a currency converter? Check XE.com for live rates

There are few books that describe accurately life on board sailing ships in the last days of sail, from the 1860s to the First World War; the romantic image conjured up by many who wrote from a safe distance belies the harsh realities which were a sailorman's lot. Domville-Fife, in collecting together the personal stories of seamen while they were still alive, was able to present a truer picture of the tough last days of sail. Long voyages on board nineteenth-century sailing ships were marked by isolation, boredom, and miserable living conditions that taxed the endurance of men already hard pressed by the gruelling and dangerous nature of shipboard work. While some were attracted to a life of adventure most simply went to sea for a living, and a meagre one at that. They experienced neither the excitement of life on the crack clippers of the earlier decades nor the safety of the steamships; they were caught in the limbo of a dying profession where poor pay, discontinuous employment, prolonged isolation from family and physical hardship were the norm. No wonder that murder, mutiny, starvation and shipwreck appear in the memoirs gathered here. Domville-Fife surely did future generations a great service by piecing together this reality. First published in 1938, these memoirs are now available again in this superbly presented new edition with a new selection of stunning photographs and a fascinating introduction on life at sea in the dying world of sail. A wonderful read for all enthusiasts and historians of the merchant service in the days of sail.

The second half of the 19th century saw the creation of the most beautiful ships the world has ever known. But, as time passes, the often brutal reality of life under sail has been blurred by a veil of nostalgic sentimentality. Bruce Stannard removes his rose-tinted spectacles to look at a new book in which the men who crewed the great wind ships describe what it was really like to be lying out on the tops'I yards in a Cape Horn gale.
The three-masted British barque Garthsnaid rounding Cape Horn, January 1920.

When I was a child growing up on Balmain's gritty industrial waterfront in the immediate post war years, it was still possible to take a ferry across Darling Harbour to Erskine Street Wharf and there, in the rough and tumble heart of the old working waterfront, enter a world that had changed but little since the roaring days when the port of Sydney was crowded with sailing ships from around the world. As a barefoot boy I earned my first meagre wages selling tabloid newspapers in smoke-filled, beer-slopped sailors' dives up and down 'Erko' and the Hungry Mile.

An essential addition to any mariner's bookshelf

The Pilot - Official Journal of the UK Maritime Pilots' Association

This book is a wonderful record of these men and their ships and the sea. Thoroughly enjoyable, and once started cannot be put down. A book to grace any library and a must have publication for naval historians.

â€˜Well illustrated with a selection of stunning photographs, this book is a good read for enthusiasts, historians and all lovers of the history of our industry.â€™

The author has brought together the personal stories of the seaman who worked the square riggers in the closing days of commercial sail. A remarkable picture of what life afloat in those days was really like. Not the glory of the clipper ships but the hard working men of square sail. A fascinating book well put together and well illustrated.

In Square Rigger Days there are accounts of angry shipboard exchanges, mutiny and murder. Seaforth Publishing is to be commended for salvaging Donville-Fifeâ€™s book which in the new edition includes many striking black and white photographs. If anyone reads it having harboured cosy perceptions of the last days of the great commercial sailing ships, the revelations in this book will hit them like a blast of Arctic seawater.

Telegraph â€“ The Journal of Nautilus