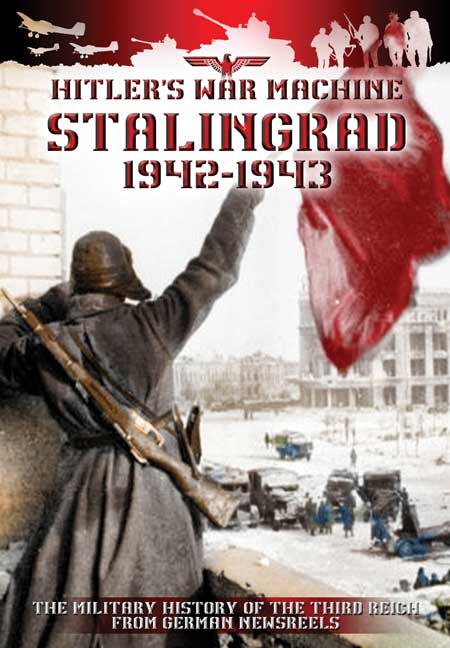 This volume featuring translated Wochenschau newsreels records the titanic Battle of Stalingrad which led to the destruction of the Sixth Army. The heavy losses sustained by the German army make it arguably the turning point of World War II.

An exciting and very entertaining DVD that provides a precise history of the Third Reich...If you are looking for an entertaining film or DVD summarising the Battle for Stalingrad then this will fulfill that requirement most splendidly.

This is film footage that should not be missed.

Primary sources are always thrilling to to be presented with, as for most of us it's the closest we'll ever com to that elusive feeling of 'touching history', that 'time slip' moment we all crave.

The remastering on the video footage is great. It's far from flawless, but it's certainly as good as the source material allows. The aerial footage in particular is very engaging. The urban fighting is eerily tense and draws you right in.

Here we have another film documentary from the German Propaganda Kompanien (PK) told in the newsreel style of the Die Deutsche Wochenschau, the weekly cinema newsreel chronicling the events of Germany’s exploits in World War II on land, sea and air. As the title suggests, this follows Germany’s push into Russia and specifically Stalingrad.

In a week when the release of the Russian made film Stalingrad (4 out of 10 for the non too imaginative title) hits UK Cinemas, I thought I’d take a peek at this “through German eyes” DVD. Again, as with most of the Hitler’s War Machine range of titles I wasn’t to be disappointed. Just the name Stalingrad conjures up images of a city laid to waste. With horror, death and disease a daily ritual, survival was measured in days and weeks rather than months or years and a bullet wound, the loss of a limb or even your sight were considered to be ‘lucky’ as it meant a ticket out of the hell.

Sleeves rolled up during the day to soak up the sun that shone through the smoke that hung constantly over the city. Greatcoats, blankets and boots stuffed with straw in a pitiful attempt to keep warm at night. The contrasts were cruel, giving hope in the waking hours and then sucking life away at dusk. In a conflict that lasted only five months, from September 1942 to February 1943; one would be forgiven in believing that it lasted much longer, as nearly two million casualties were listed as a direct result of the battle.

No one was exempt from the slaughter. Over 40,000 civilians were killed and twice that number wounded. Whole areas were turned to rubble and outlying towns and villages obliterated, never to be rebuilt and slowly forgotten forever. This was the turning point of WW2. It made D-Day possible by swallowing up and destroying whole German regiments and divisions, weakening a German military machine which was never to recover. The casualty figures and the ferocity makes the Pacific theatre, so often shown in movies and books as a fight against evil, a mere sideshow and a mopping up exercise. Some say Germany lost the war at Stalingrad an argument which has its merits. Given the might of the Russian killing machine they may well have turned up on the shores of Normandy but from inland and not the beaches! This was total War, never to be rivalled again.

All in all, another fantastic DVD from Pen & Sword, and at a mere £7.99 for 60 minutes well worth looking at.