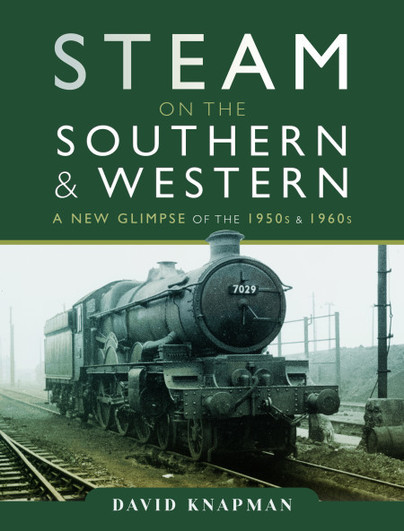 Steam on the Southern and Western (Kindle)

Click here for help on how to download our eBooks
Add to Basket
Add to Wishlist
You'll be £10.00 closer to your next £10.00 credit when you purchase Steam on the Southern and Western. What's this?
Need a currency converter? Check XE.com for live rates

Subtitled “A New Glimpse of the 1950s & 1960s”, this publication provides an interesting collection of black & white photographs from the late 1950s to the end of steam. A few of the photos were taken with a Brownie Box camera and others subsequently with an AGFA 35mm camera by a young steam enthusiast with an eye for a good photo.

The book is divided into two main sections for Southern and Western steam, with chapters covering the various locations visited within the regions. The Southern section has an interesting selection of locations from Waterloo, Guildford and Ashford to the country byways such as the Kent & East Sussex line, Hayling Island Branch and the Isle of Wight railway. A few images of the Somerset & Dorset line are also included.The Western Region chapter likewise cobers a wide variety of locations from Paddington, Reading, Oxford, Tiverton & Hemyock branch, the Cambrian Coast and the Barry Island scrapyard.

This is a fascinating collection of photos, well captioned by the author and includes a number of infrastructure images as well the wide variety of steam locomotives. This book will bring back happy memories to those of us old enough to remember that period and provide an insight to younger readers.