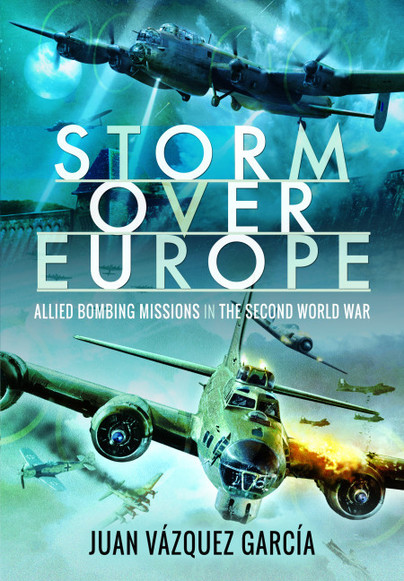 Click here for help on how to download our eBooks
Add to Basket
Add to Wishlist
You'll be £4.99 closer to your next £10.00 credit when you purchase Storm Over Europe. What's this?
Need a currency converter? Check XE.com for live rates

Following the Battle of France in 1940, British Bomber Command launched its response to the then-almighty Wehrmacht. Sadly, its beginnings were not at all promising: its resources were limited and the twin-engined aircraft in service had a very limited load capacity, as well as being vulnerable to the Luftwaffe.

The progressive entry into service of the great four-engined planes would change the situation, but the great problem of night time raids, such as correctly identifying targets and a precise launching of the bombs, would never be adequately resolved.

Bomber Command's highly controversial bombing tactics, under the firm hand of Arthur 'Bomber' Harris, continued to develop until the very end of the war, creating a weapon of devastation and terror.

Meanwhile, in 1942 the Eighth American Air Force began a campaign of day time bombing raids on targets in continental Europe that would last until the end of the war.

Flying in increasingly larger formations, initially without any fighter escort, the B-17 flying fortresses and the big B-24 Liberators were up against the aggressive German aircraft, who were forced to develop adequate tactics in order to deal with the enormous defensive firepower of the American planes. It would not be until the entry into service of the long-range escort fighters, especially the formidable P-51 Mustang, that the Luftwaffe finally found itself at a distinct disadvantage.

Unlike the devastating and bloody night time campaign launched by Bomber Command, the American bombers were determined to demonstrate that precision bombing was possible on selected, strategic targets, which would stifle the economy and the German war effort, as well as minimizing civilian casualties.

A well-illustrated study of the air war over Europe, many images being in full colour. The author has provided a very readable study, with images of the aircraft that took part in the greatest air battle in history. – Very Highly Recommended.

The book with numerous photos, data, a very frank language and an examination of the allied missions that highlights its strengths and weaknesses is presented as a volume that can not miss on the shelves of fans of military history and aviation. The numerous schemes also make you want to know more by going to visit the huge catalog of the Pen & Sword publishing house.

The author has delivered a concise introduction to the subject that is ideal for any reader wanting an overview of the Allied bombing campaigns. It is particularly helpful in detailing the technical aspects of the bombers and the fine balance between firepower and range. It is well supported by photographs and particularly good graphics that help greatly in understanding the capability of each plane. This is a good introduction to the subject that fuels the search for further reading.

Juan Vázquez García is a military history scholar who has published several books about the First and Second World Wars, some of which have been translated into English, French, German and Greek. He has visited many battlefields and military museums all over the world, as well as modern fortification sites.

He worked for the Ministry of Defence for fifteen years and now works as a dermatologist in a private hospital in La Coruña. He is married and has two daughters.