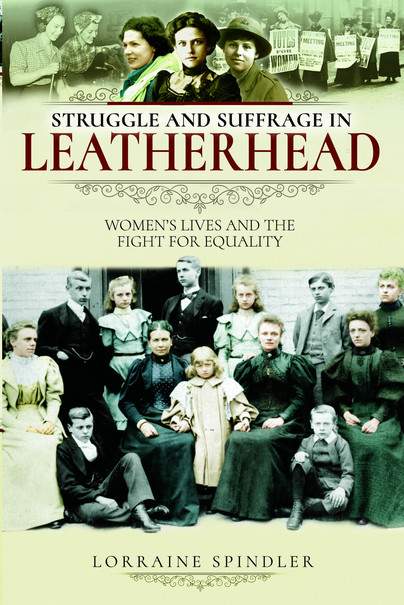 Struggle and Suffrage in Leatherhead (Kindle)

Click here for help on how to download our eBooks
Add to Basket
Add to Wishlist
You'll be £4.99 closer to your next £10.00 credit when you purchase Struggle and Suffrage in Leatherhead. What's this?
Need a currency converter? Check XE.com for live rates

The road to suffrage for the women of Leatherhead was often bumpy and unwelcomed by men and women alike. The Women’s Suffrage Caravan rolled into Leatherhead on Saturday, 16 May 1908, its presence inciting riots amongst many of the menfolk. The town’s Unionist Club in December 1908 passed the motion that it was ‘unpropitious’ for legislation on the question of women’s suffrage and yet, from behind the closed door of her home in Belmont Road, women’s rights campaigner Marie Stopes had begun to pen Married Love; suffrage campaigner Dame Millicent Fawcett would fascinate her audience at Victoria Hall in 1910; and Emmeline Pankhurst’s arrest and detention at Leatherhead police station would capture the interest of the nation, placing Leatherhead centre stage of the push towards revolution in women’s rights.

By the arrival of the First World War, middle-class girls were not allowed out without a chaperone, few married women had a job and no woman was allowed the vote. It was the general view that politics and work were only suitable for men. By the arrival of the Second World War Leatherhead’s women were still expected to live up to the typical housewife persona, where their main role in life was to bring up the children and do the housework. The husband was usually the head of the house, and his word was law to both his children and his wife, the one expected to look after the children.

Using numerous primary sources, this fully illustrated book tells the story of numerous famous and ordinary women who lived and visited Leatherhead between 1850 and 1950; Ella Neate, born into a family of local grocers, who discovered a talent for operetta; Pearl Kew, one of the first women in the town to own a car, enabling her to drive to work as a teacher in Guildford; the charity work of Cherkley Court’s Letitia Dixon; Emily Moore the Swan Innkeeper, these many more fascinating stories of local women whose lives have hidden in the shadows of Leatherhead’s menfolk.