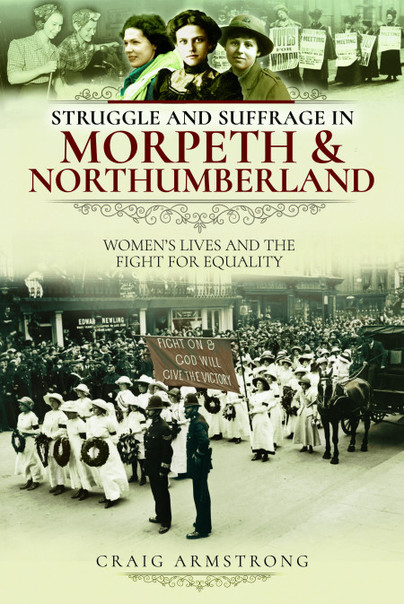 Click here for help on how to download our eBooks
Add to Basket
Add to Wishlist
You'll be £4.99 closer to your next £10.00 credit when you purchase Struggle and Suffrage in Morpeth & Northumberland. What's this?
Need a currency converter? Check XE.com for live rates

This book starts in Victorian Britain with information about the census and the type of working conditions the women had to endure. Centring on the harsh farming jobs and conditions they put up with. As Northumberland was sparsely populated it was the ideal farming area.
It isn’t until we move into the Edwardian age that Suffrage & the Suffragettes movement is mentioned. What did surprise me was that quite a number of men gave their support and help to the movement. The book gives a good amount of detail about Emily Davison, the lady who later went on to throw herself in front of the Kings horse. (Taking things into her own hands, though now there seems to be some doubt as to what was supposed to happen). This lady seems to have been rather a maverick, taking matters into her own hands without the permission of the WSPU. The horse incident really seems to have been the turning point in 1913, and then of course came the First World War when it was estimated that 2 million women replaced men in employment & proved invaluable in the war effort.
This book also contains an index which can often prove useful for family historians.