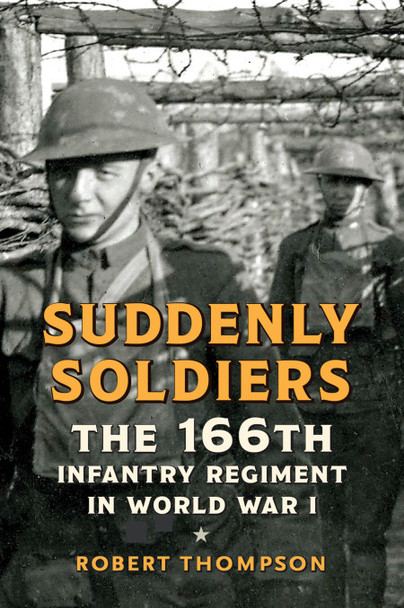 The 166th Infantry Regiment in World War I

Preorder
Add to Wishlist
You'll be £20.00 closer to your next £10.00 credit when you purchase Suddenly Soldiers. What's this?
+£4.50 UK Delivery or free UK delivery if order is over £35
(click here for international delivery rates)

When America entered World War I in April 1917, state National Guard units had never planned to mobilize for this kind of war, and the men who made up the hometown companies of each regiment never imagined that they would be asked to fight in what was then the most savage war in human history—they were “innocents” being thrown into a horrendous European conflagration. Made up of companies from ten Ohio towns, the 166th Infantry Regiment became part of the famous 42nd Division, known as the “Rainbow Division.” They were the third American division to arrive in France, where they fought courageously in the trenches at Lunéville and Baccarat before being a key part of the American effort in the Second Battle of the Marne and the Saint Mihiel and Meuse-Argonne offensives. Despite their initial lack of training in modern warfare and weapons, the 166th Infantry compiled an impressive combat record. However, that record came at a terrible cost, with the regiment suffering over two thousand casualties in just nine months of fighting. While they battled the Germans, these hometown Guardsmen lived in trenches and foxholes for weeks at a time, while subsisting on canned beef and coffee amid near constant rain, deep mud, rats, and body lice that made their lives miserable. Because of poor planning and leadership from higher headquarters, they were often asked to achieve impossible objectives amid withering enemy machine-gun fire without proper logistics or artillery support. Yet, despite these challenges, they would persevere, overcome, and emerge victorious. Using regimental histories and the letters and diaries of the soldiers who fought in France, Suddenly Soldiers: The 166th Infantry Regiment in World War I by author and historian Robert Thompson tells the compelling story of the young men—“citizen soldiers”—who have always borne the cost of America’s freedom with quiet courage.

ROBERT THOMPSON is a historian and former career military officer. He has a BA in history from Texas Tech University and a graduate degree in Military Studies from American Military University. He is author of A Woman of Courage on the West Virginia Frontier: Phebe Tucker Cunningham, Disaster on the Sandusky: The Life of Colonel William Crawford, and General Emory Upton in the Civil War: The Formative Experiences of an American Military Visionary. His articles have appeared in America’s Civil War and Military History. He lives near St. Louis, Missouri.