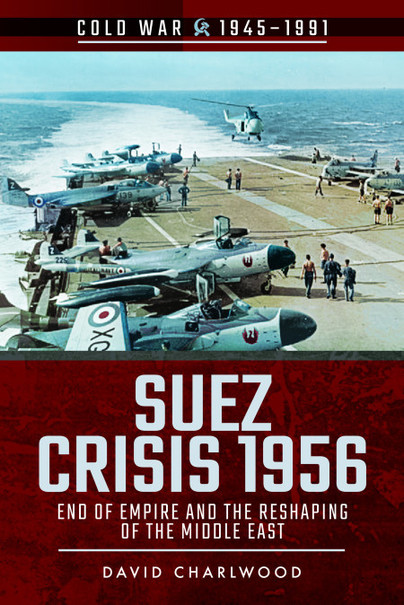 Click here for help on how to download our eBooks
Add to Basket
Add to Wishlist
You'll be £4.99 closer to your next £10.00 credit when you purchase Suez Crisis 1956. What's this?
Need a currency converter? Check XE.com for live rates

Overall, this is an excellent overview of the crisis, well written with plenty of illustrations.

Charlwood’s book does not provide a lot of details on the actual fighting during the Crisis, but that’s not his goal. The motivations of the conspirators and the reaction of their allies is the focus and he does a very good job of providing the details of a war that shouldn’t have happened.

As featured on Clash of Steel

The Suez Crisis is an event I honestly hadn’t paid much attention to or just glossed over it, but it was actually and important affair that would eventually bring down a British prime minister and herald the end of the British Empire really. I found the event although rather brief and involved mainly political too and froing between Britain, France, Israel and America was really over a strategic part of the world that controls the vast majority of the world’s oil and shipping. Now I have read David Charlwood’s work before such as the book 1920 (Pen and Sword) and this too is written in the same manner as that, in that it is very detailed and planned. A really easy and good book to read, and also for a small book (120 pages) which is part of a Cold War series, the photographs are excellent and many, I was surprised and impressed. I imagine you could read more into the subject if you wanted but I would say that this book covers it pretty well and is very informed. I would say this is an excellent book, and the series for students who would like a good knowledge which give you a comprehensive history.

You may think that the Suez Crisis is a forgotten war from a bygone era? If so, then this book will challenge your opinion. It not only sheds light on the various sides of the conflict but also the behind the scenes wrangling and sentiments. Charlwood’s tone towards the British felt overly heavy at times but all in all the book is a well-balanced, highly interesting and valuable contribution to the reading list of any self-confessed student of history.

The Cold War series has become very popular and is the form of military history series that the publisher excels at. The Suez Crisis was as significant a world changer as the defeat of the Nazis in 1945. This new addition to the series has the same high quality selection of images, including full colour images, supporting concise but highly informative text. – Very Highly Recommended.