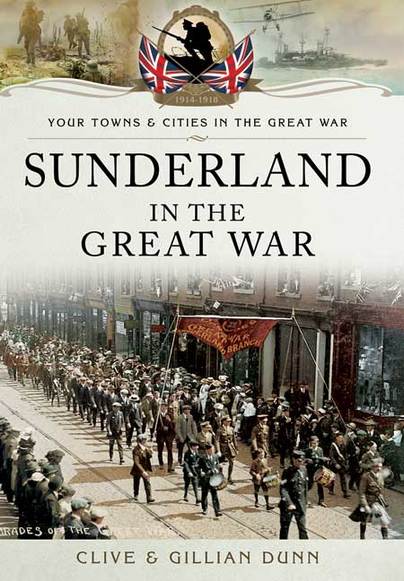 Sunderland in the Great War (Kindle)

Click here for help on how to download our eBooks
Add to Basket
Add to Wishlist
You'll be £4.99 closer to your next £10.00 credit when you purchase Sunderland in the Great War. What's this?
Need a currency converter? Check XE.com for live rates

Looks at how the Great War affected Wearsiders from the initial enthusiasm for sorting out the German Kaiser in time for Christmas 1914, to the gradual realization of the enormity of human sacrifice the families of Sunderland were committed to as the war stretched out over the next four years – including local Zeppelin attacks and experiences of those fighting for the DLI and other regiments.

As a boy Clive Dunn was fascinated by the stories his grandfather told about what he did in World War 1. It was the start of a lifelong interest in the conflict and now Clive has included the family tales of Pte Stanley Douglas in...Sunderland in the Great War.

The book includes meticulously researched material, including a patriotic march by the town's Boy Scouts and recruitment campaigns at Roker Park.

'Sunderland in the Great War'...recalls life on the home front in the conflict as well as stories of soldiers from the town. The book includes meticulously-researched material including a patriotic march by the town's Boy Scouts and recruitment campaigns at Roker Park. The book also tells of a zeppelin raid on Sunderland, attacks on business premises owned by Germans and Austrians, the formation of Pals Battalions and the role played by members of the Vaux brewing family.

This book is a mine of information, material derived from council reports and newspapers and liberally illustrated.